The terminological issues are connected with the use of “Muslim” and “Islamic” architecture.

The two words are theoretically interconnected but conceptually different. Muslim is a general word referring to religious and geographical setting of Islam.

Muslim architecture is the building style of the countries of Muslim religion, a term which may include modern or old architecture practised in these countries and which may not be necessarily Islamic nor display any known features of Islamic architecture such as the arch, the dome, stucco decoration…etc. Similarly, we say today Muslim city to refer to its location in a Muslim country rather than to its Islamic morphological features.

The other disadvantage of using this concept is related to buildings of Muslim origin but not in the Muslim world as the case of Spain, Sicily, old USSR and other countries. More positively, one can define it as including the architecture that was accomplished by Muslim masons, architects, for or under Muslim patronage (government), or in a Muslim country.

Islamic architecture can also be misleading as one may understand that it refers to the architecture of a particular religious (Islamist) group or that of a religious function while in reality it refers to the Islamic way of building as prescribed by the Sharia law. In this definition, we are not concerned with the location and actual function of the building but rather with its Islamic character in terms of design, form and décor, a definition which includes all types of building rather than only monuments. The main rule of this is apparent in the Quran, which emphasises the building of robust structures for the sake of God, see for example the verse:

This is practical for the ordinary house as well as the mosque, the palace and other major architectural monuments. However, one can analytically categorise Muslim architectural achievement in two main areas involving religious and secular. The centre of the first is the mosque which was invented in early years (the first year of Hijra) to serve a prestigious role providing shelter and refuge for the believer from the turbulent life and a world of evil. The faithful gather there five times a day and every Friday on a weekly basis. The articulation of elements such as arches, domes and columns, calligraphic illustrations and geometrical decorating patterns create a continuous sense of peace and contemplation reflecting the Quranic verse:

“O ye who believe! Enter into Islam whole-heartedly; and follow not the footsteps of the evil one; for he is to you an avowed enemy.” (2:208)
(see separate article, The Mosque)

Architecturally, the second most important religious building is the Madrassa, a university (or college) which evolved from the mosque and was finally established at a time when Europe was in its early dark ages. The form of Madrassa progressively evolved starting from the simple form of houses of the teachers and reaching the monumental character of Kuttubia in Morocco. Here, the building incorporated lecture theatres, library, residential rooms for students and facilities such as bathes, fountains and a courtyard.

Although, a handful of madrassas still exist today in the Muslim world, most of its religious teaching is undertaken by modern universities which do not structurally differ from their Western counterparts. Other religious buildings include monastic mosques (Zawiya) and mausoleums which can also be very elaborate, reaching sometimes a monumental position like the Taj Mahal in India.

Muslim secular buildings consist largely of domestic structures; palaces and ordinary houses. Here, one cannot stop appreciating the successful adaptation of space to religious values and teachings especially those relating to private and public domains. From early palaces of the Ummayyad and Abbassid Caliphate to modern houses, there was much observance of segregation between the female and male territories. The first was designed for family and domestic life, reserved for children and women. In the palace, the public space was for conducting public affairs such as reception halls, meeting rooms, ceremonial courts (maidaan) and mosques for princial entourage. Their setting, organisation and décor had worldwide reputation that they were made settings for many western sagas and tales.

Other buildings that form part of Muslim secular architecture include Military structures such as castles, ribats and towers and walls. These were erected to provide protection for cities especially in areas where external threat was menacing as in Palestine and its bordering countries (Syria and Jordan), in Cairo and North African coast. Giant gates forming part of the defensive system as well as elements of ceremonial furniture (victory) were also erected along these ramparts. The oldest of these is Bab Raqqa in Baghdad of Al-Mansur (in 772) (Creswell, 1958), and Bab Alfutuh in Cairo (11th century).

Muslim keen interest in trade produced highly developed architecture in the form of numerous caravanserais, warehouses (Qaysariya or Khan) and suqs (bazaars) which formed the economic heart of the Muslim city. In engineering architecture, Muslims managed to create ensembles of structures combining high degree of engineering, functionality and outstanding beauty. Their bridges, fountains and reservoirs also form fascinating elements showing sense of purpose and professional excellence. A feature that was instructed and nurtured by the Prophet (pbuh) himself who declared that:

“Allah loves that when one accomplishes a task, to perfect it.” 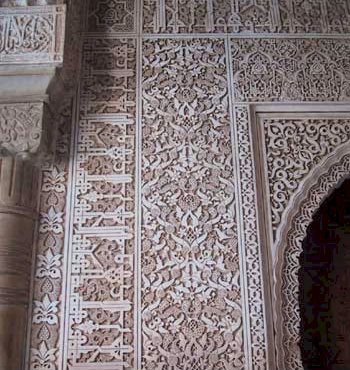 No wall paper here! Alhambra interior walls carved with verses from the holy Qu’ran. Colours have faded away.