Many Muslim scholars dealt with minerals and gems and wrote monographs on the subject. The golden age of their writings was the 4th-5th century after Hijra (AH) (10th-11th century CE). They used almost all the physical properties now known to us to identify and differentiate minerals. Experimentation was a widespread habit in the study of minerals. Al-Biruni, in the author's view, was the leading scientist in this subject.

Mineralogy is the science studying “minerals”. A mineral is a naturally occurring substance that has a definite chemical composition and crystal structure. In other words, a mineral is a crystalline, chemically pure, natural material. Accordingly, gold, diamond, quartz, calcite, sapphire and pearl are examples of minerals. The importance of minerals and mineral resources are well known and do not need to be mentioned here.

Gems and precious stones are special types of minerals. They are rare, beautiful (in colour, transparency, and lustre), and hard enough to resist physical and chemical changes for some time. Diamond, ruby, sapphire, and emerald have these properties; they are gems and, of course, minerals. The importance of gems to emperors, kings and wealthy women was possibly the driving force behind their recognition since the dawn of human civilisation.

Certain varieties of mineral, precious stones, and gems were known to the Ancient Egyptian, Mesopotamian, Ancient Indian, Greek, and Roman people. Most of the lands of these people became part of the Islamic State or “Caliphate”. Consequently, their writings on gems and minerals, as was the case with other subjects, were translated into Arabic in the first three centuries AH (6th to 8th CE). Therefore it is not surprising to find the best contributions by Muslim scientists to mineralogy and gemology was in the 10th and 11th centuries CE.

2. Scientists of the Subject

Most of what was written on the subject of minerals, stones, and gems was lost. However, a few monographs survived, and these are now in print. Additionally, information on the subject can be found in some encyclopaedic works. These are some examples:

From the dawn of human civilisation up until the 18th century CE, minerals were studied by the use of their physical properties; e.g. colour, lustre, hardness and crystal habit. Whilst Muslim scientists used the same set of physical properties as scholars preceding and succeeding them, they also made original contributions to the subject. The following are some examples of these properties and how they were used by Muslim scientists to identify certain minerals.

Since colour is misleading in the identification of minerals, it is important to emphasise their ability to place all these coloured varieties in one gem category: Yaghout or corundum. To do this, they depended on other properties beside colour.

Streak is the colour of the mineral powder when scratched. It is still used now to differentiate, for example, between minerals which have the same colour but vary in their streak colour. This property was used by Al­Biruni to group several varieties of hematite Fe203 (Shathenj ia) under one mineral.

This is the ability of a mineral to analyse the white light into its seven components, violet – red. Diamond is one of the minerals which have this property. To Muslim scholars, the higher the quality of diamond, the better it disperses light.

Hardness is the ability of a mineral to scratch other minerals. The scratched mineral is the softer of the two. This property was well known to Muslim scholars, to the degree that they arranged the known minerals according to their hardness. Al-Biruni wrote in his monograph “Al-Jamaher …” p. 66″: “I have started my book describing diamond before all other gems because it is the leader or master. It scratches Yaghout (corundum) and Yaghout scratches what comes below it. However, Yaghout cannot scratch diamond. … etc” (Author’s translation). This is exactly our present knowledge of both minerals. Al-Biruni also differentiated between diamond and a variety of quartz by hardness. A lot has been written on this property; these few lines are sufficient to explain the idea.

Habit is the most common natural form or shape of the mineral. It is a reflection of its crystal form. This important property was also frequently used by Muslim scholars to differentiate between minerals. Let us translate the habit of diamond from Al-Tiefashi (author’s translation): “… and of the properties of diamond, all types have right angles, six or eight or more, the faces are triangles. If it is broken, faces will be triangular even at the smallest parts …” This is true because we now know that diamond is of the cubic crystal system, and its more important habit is the octahedron.

Al-Biruni, p. 94-95 differentiated between diamond and Yaghout, and diamond and quartz using the crystal habit. Figures 1 and 2 are drawn by the author according to the descriptions of AI-Biruni.

Table 1 :Specific gravity of some minerals and materials relative to the Kutb yaghout (From Al-Khazen, Mizan Al-Hikma, p. 58). 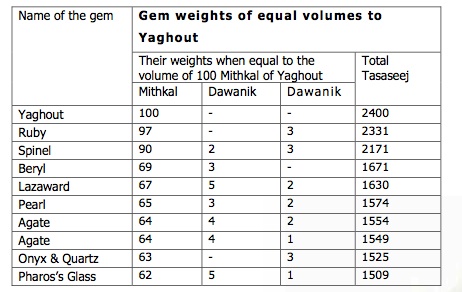 Table 2: Some of the specific gravities of Al-Biruni compared to modern values. 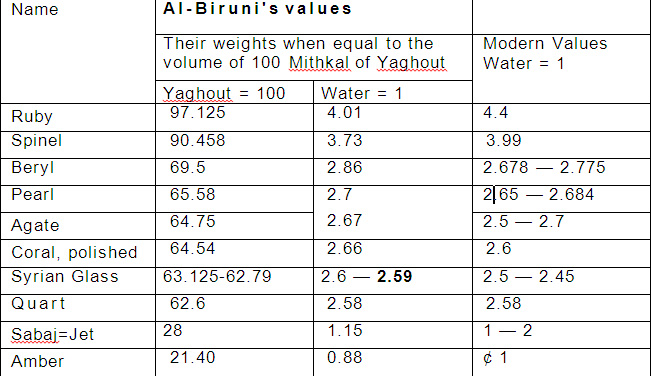 A short example can be found written in Al-Biruni’s book:

“Al-Jamahir …” p. 58, while talking about Yaghout (ruby): “…I (AI-Biruni) bought some raw pebbles brought from India. I heated some of them, they became more red. There were two very dark pieces, one was with reddish colour, the other was less red. I put both pieces in a crucible and directed the flame at them for a period sufficient to melt 50 Mithkal of gold. I took the pieces after cooled. I noticed that the less red piece became purer with a rose red colour. The other, deep red piece lost its colour and became like Sarandeep (now Sri Lanka) quartz. I then examined this latter piece and found that it was softer than the Yaghout I concluded: when redness is lost with heating, the heated material is not Yaghout. This conclusion cannot be reversed; i.e. if the heated material stays red it is not necessarily Yaghout, because iron stays red after heating”. (Author’s translation).

There are several tests in the above paragraph:

There are many other experiments where more than one physical property is used to identify a mineral or a gem.

5- An Example of Other Writings

Let us end this article by giving an example of other writings in the field of mineralogy. The example is Sabaj (known now as jet). The writings on diamond or Yaghout are too long to copy.

“This is not a gem……………… It is a deep black stone, sageel, very soft, light, and burns with fire. It
ignites if heated by the sun’s rays and has a petroleum smell which is in agreement with our (his) descriptions. It is a solidified petroleum very much like the black stones used to heat ovens in Farghanah (now in Uzbekistan). This is because the asphalt, bitumen, and petroleum rises in the

mountains in Farghanah. few lines on the metals and minerals in Farghanah, … , The best Sabaj
quality comes from Tus (now in Iran), it is used to make mirrors and utensils, and usually found in

black, wetted, rotten land……………….. It is also brought from the Dead Sea area. Its specific gravity
relative to Yaghout is approximately 28. The type brought from Samarkand has a specific gravity of 26.25 (around 1 relative to water). I (He) fixed this weight relative to Yaghout because of the abundance of bubbles within it which increase the volume and decrease the weight.” P. 68, “Al­Jamahir…“ (Author’s translation)

Note the wealth of information in this paragraph: