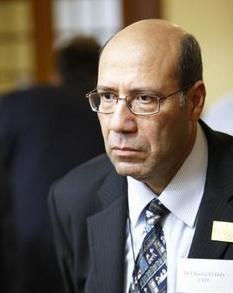 The Leeds University Islamic Awareness Week organised by students, invited Dr. Okasha El Daly to deliver the opening lecture on Monday 16th February 2009 which took place at Rupert Beckett Theatre, University of Leeds. The audience was mainly students and staff but the event was also open to the public.

The title of the lecture delivered by Dr El-Daly, the Director of Projects at FSTC and a renowned scholar in Egyptology, was “Muslim Heritage in Our World”. The lecture covered the sources of Islamic sciences and the interest Muslim scholars had in the ancient civilisations showing that they felt kinship with fellow scientists regardless of time difference, colour, race, creed, language, or class. They treated pre-Islamic cultures with due respect and often cited Hermes, Aristotle, Cleopatra and Galen. In the case of the Egyptian Queen Cleopatra, they portrayed her as a great scholar who wrote several treaties on gynaecology, cosmetics, alchemy and mathematics in sharp contrast to her Western image.

The lecture then focused on motivations which drove excellence in science among Muslims such as the need to carry out useful deeds (a’mal nafi’a) and being useful to fellow human beings, an example of which can be seen in the title of the famous Muslim inventor Al-Jazari (13th century) “Al-Jami’ bayna ‘l-‘ilm wa-‘l-‘amal al-nafi’ fi sina’at al-hiyal” which literally means “Combining Science and Useful Deeds on Making Ingenious Devices”.

Several famous scholars who advanced scientific knowledge and were at the cutting edge of science, were given as examples of Muslim contribution to our own knowledge today. Some of these were Ibn Al-Haytham (10th century) who laid the foundation of our camera, Al-Biruni who laid the foundation of the theory of gravity, Al-Zahrawi and many others. Women, highly respected, feature in Islamic history as teachers and patrons of sciences. One of these was Fatima Al-Fihri (9th century). Many non Muslims also feature among the greatest scientists of Islam such as Qusta Ibn Luqa, Ishaq Ibn Hunayn, Moses Maimonides (Musa Ibn Maymun). They flourished in an environment that treated people based on their merits and deeds and not on their race or creed.

The lecture finished with a discussion of the relevance of this great heritage to us today and what we can learn from it to move us forward, not only Muslims but all humanity. This was followed by a long session of questions and answers where students had ample opportunity to explore their own place and what they could do to build on this heritage and raise the awareness of others.

Book Review of ‘Egyptology: The Missing Millennium’ by Okasha El-Daly