In 12-13 November 2008, the United Nations organised in New York a high-level meeting of the General Assembly to promote inter-faith dialogue. The meeting was marked by the active participation of the heads of state and senior officials of more than 75 Member States who came together to support mutual tolerance, respect and understanding. At the end of the high-level meeting, the General Assembly of the UN adopted a general declaration praising the values of tolerance and mutual respect between faiths and cultures. On the occasion of this high-level meeting in New York, The Foundation for Science, Technology and Civilisation organised at the UN in New York a display on "Multi-Faith Scientists in Islamic Civilisation" and a conference on the "Strategic importance of Muslim Heritage in our World and its impact on Diplomatic, Educational and Socio-economic Developments". 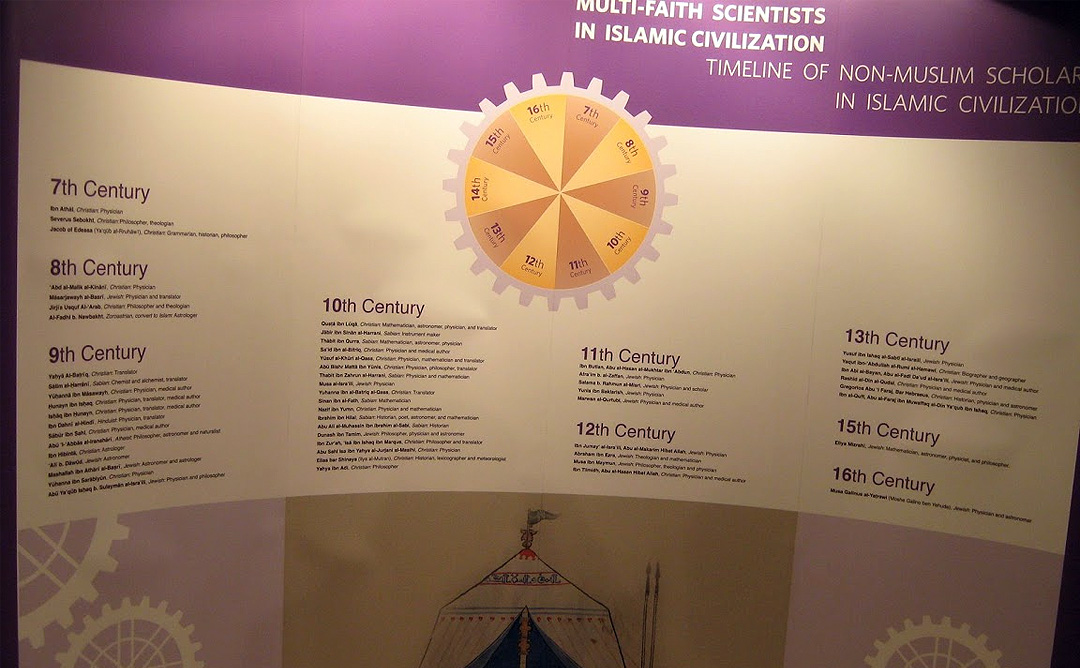 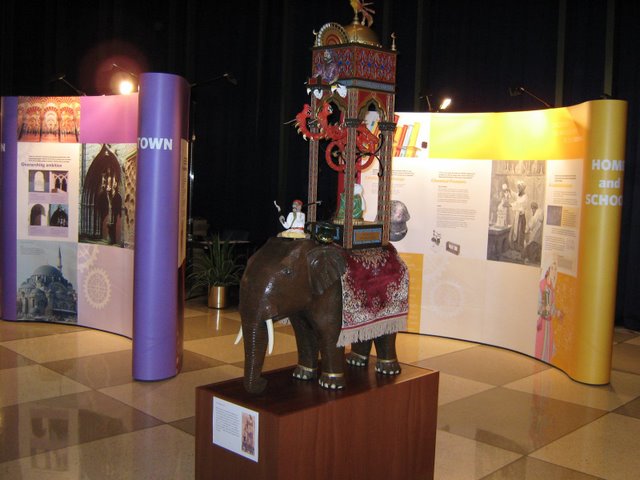 A reconstructed model of The Elephant Clock at the center of the display (© FSTC 2008).

In 12-13 November 2008 the United Nations held in New York a high-level meeting of the General Assembly to promote inter-faith dialogue (High level meeting on the culture of peace). The meeting was marked by the active participation of the heads of state and senior officials of more than 75 Member States who came together to support mutual tolerance, respect and understanding. This high-level meeting comes in the course of the International Year for the Rapprochement of Cultures (2010), the General Assembly decided in its resolution 62/90 (December 2007) to hold a meeting with civil society on inter-religious and intercultural dialogue, understanding and cooperation for peace.

The initiative of inter-faith dialogue was launched by King Abdullah Bin Abdulaziz Al Saud of Saudi Arabia in Madrid in July 2008 (click here to read the Madrid Declaration). This initiative has come at a time when the need for dialogue among religions, cultures and civilizations has never been greater. In this context, the high-level meeting in New York has brought together people who might not otherwise have a chance to interact. Along with other initiatives, it will contribute to building a more harmonious world. 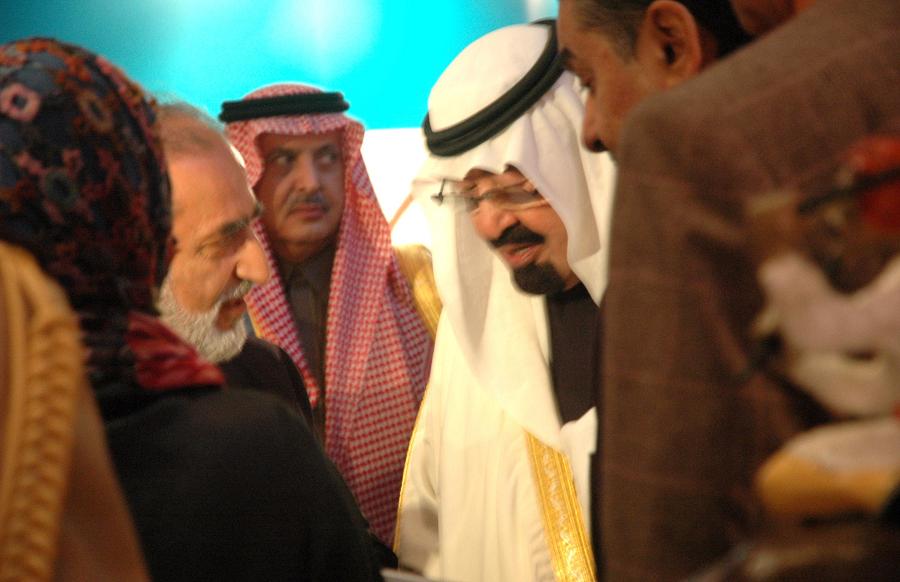 At the end of the high-level meeting, the UN Secretary-General Mr Ban Ki-moon, read a declaration in which The General Assembly of the UN has sent a strong message of tolerance to the world. 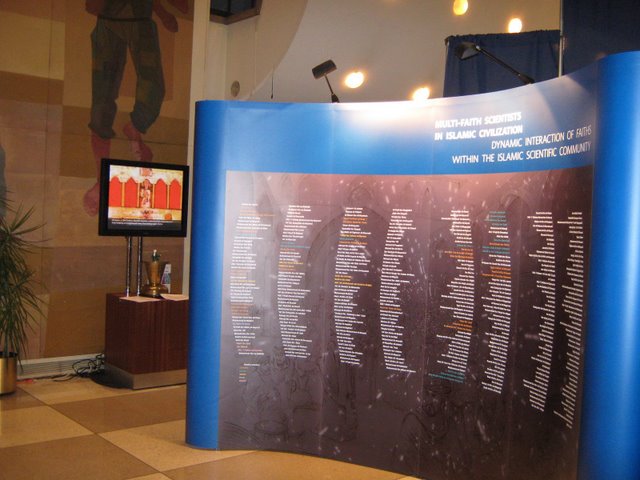 “At the initiative of the Custodian of the Two Holy Mosques, King Abdullah bin Abdul-Aziz Al-Saud of Saudi Arabia, the General Assembly convened a plenary high level meeting during its sixty-third session on 12 and 13 November 2008 under item 45 culture of peace.

The meeting reaffirmed the purposes and principles enshrined in the Charter of the United Nations and in the Universal Declaration of Human Rights. The meeting further recalled that all States have pledged themselves under the Charter to promote respect for human rights and fundamental freedoms for all, including freedoms of belief and expression, without distinction as to race, sex, language or religion.

Concerned about serious instances of intolerance, discrimination, hatred expressions, and harassment of minority religious communities of all faiths, participating states underlined the importance of promoting dialogue, understanding, and tolerance among human beings, as well as respect for all their diverse religions, cultures and beliefs.

Participating states affirmed their rejection of the use of religion to justify the killing of innocent people and actions of terrorism, violence and coercion, which directly contradict the commitment of all religions to peace, justice and equality.

Taking note of the initiative of the King of Saudi Arabia and the World Conference on Dialogue held in Madrid between 16 and 18 July 2008 under his patronage and graciously hosted by the King and Government of Spain, the General Assembly reiterated its call for promoting a culture of tolerance and mutual understanding through dialogue, and supporting the initiatives of religious leaders, civil society, and states seeking to entrench the culture of peace, understanding, tolerance, and respect for human rights among the proponents of various faiths, cultures, and civilizations.

Participating states expressed their commitment to strengthening and supporting existing mechanisms within the United Nations for promoting tolerance and human rights, preserving the institution of the family, protecting the environment, spreading education, eradicating poverty, and fighting drug abuse, crime and terrorism, noting the positive role of religions, beliefs and moral humanitarian principles in tackling these challenges”. 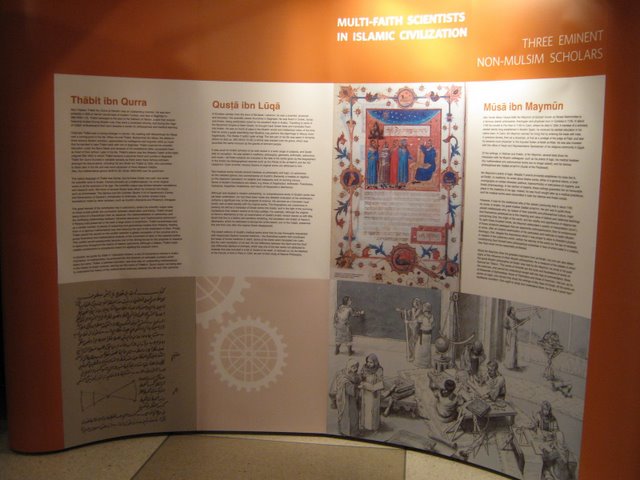 The Foundation for Science, Technology and Civilisation (FSTC) was associated with the high-level meeting in New York for which the Foundation organised a display: Multi-Faith Scientists in Islamic Civilization and a conference on The Strategic importance of Muslim Heritage in our World and its impact on Diplomatic, Educational and Socio-economic Developments. Both events were hosted in the United Nations Building in New York in 12-14 November 2008. Aimed at demonstrating Religious Dialogue in Action throughout Islamic Civilization, they were attended by a large number of VIPs, representatives of countries from all over the world and by the diplomatic delegates at the UN.

The display and the conference were developed by the FSTC, and sponsored by its following partners: Al-Aghar Group, Abdul Latif Jameel Community Services Programs, Dar Al-Hekmah College and Layan Cultural Foundation.

The conference Strategic importance of Muslim Heritage in our World and its impact on Diplomatic, Educational and Socio-economic Developments was honoured by two lectures presented by Professor Salim Al-Hassani, Chairman of FSTC, and Dr Suhair Qurashi, Dean of Dar Al-Hekmah College in Jeddah, Saudi Arabia. 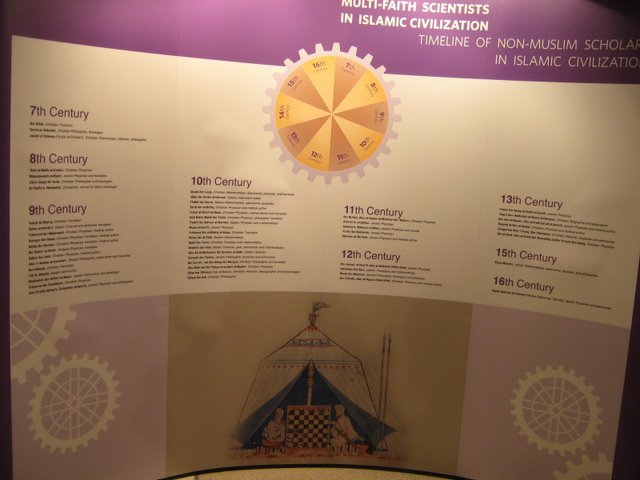 4. Dynamic Interaction of Faiths within the Islamic Civilisation

Designed to accompany the Dialogue conference at the UN during 13-14 November, the display on the Multi-Faith Scientists in the Islamic civilization visited by representatives of countries, ministers, ambassadors, academics, researchers, and journalists, both Arabs, Muslims and from Europe, America, Asia and Africa.

The aim of this display was to enrich this conference and convey message of cooperation and friendship between all scientists and scholars from all faiths during the whole period of Islamic civilization and their spread over the entire Muslim world. The take-away message is that Muslims and non Muslims worked side by side to develop and build their society without prejudice of religion, race or culture.

The display also showed some examples of Muslim inventions which have been in use up until the present day. Hence, the overall message also incorporates the notion that science, technology and contributions to the betterment of society and environment were considered part of religious obligation. 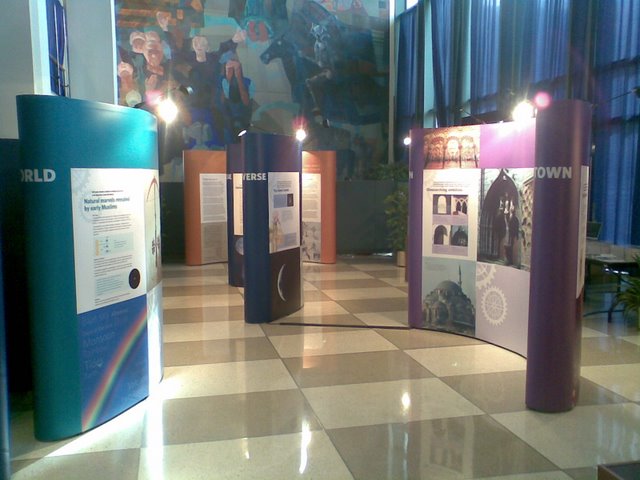 1. Nine curved panels with graphics and text on both sides. Three of those panels, which held a central place in the display, were designed especially for the New York events. They contained:

2. A static replica model of the famous clock called “the Elephant Clock of Civilisations”. The original clock was designed and constructed by Al-Jazari, a Muslim inventor, (South Turkey/North Syria) in 1206. The main feature of this clock is that it is built from parts celebrating the cooperation of and accumulation of knowledge from various civilisations, as its components belong to several cultural areas: The elephant (Indian), Float (Greek), Dragons (Chinese), Phoenix (Egyptian) and Turbaned Robots (Muslim). This clock was recently exhibited at the UK House of Parliament attracting enormous attention (see 1001 Inventions at UK Houses of Parliament and Muslim Heritage in our World: Social Cohesion.

On the margin of the display and the conference, several hundred copies of the book 1001inventions: Muslim Heritage in our World (Manchester: FSTC, 2006) were distributed to and purchased by the visitors and attendees.

To view the photos taken during the display and the conference, see this Album. 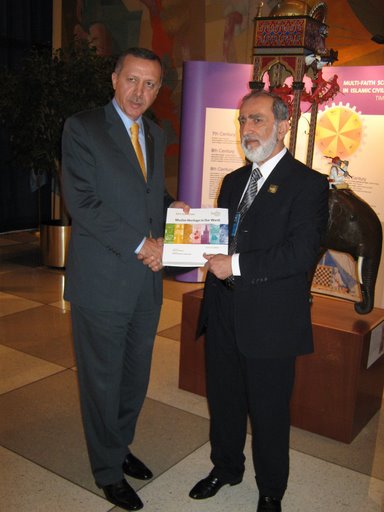 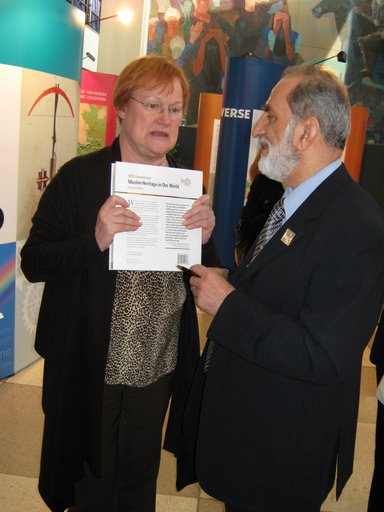 HE Tarja Halonen, The President of Finland, receiving the 1001 Inventions book from Professor Salim Al-Hassani (© FSTC 2008). 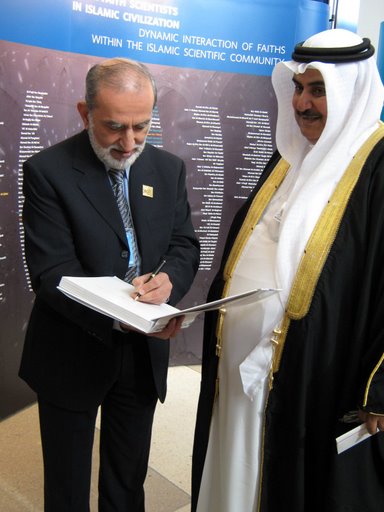 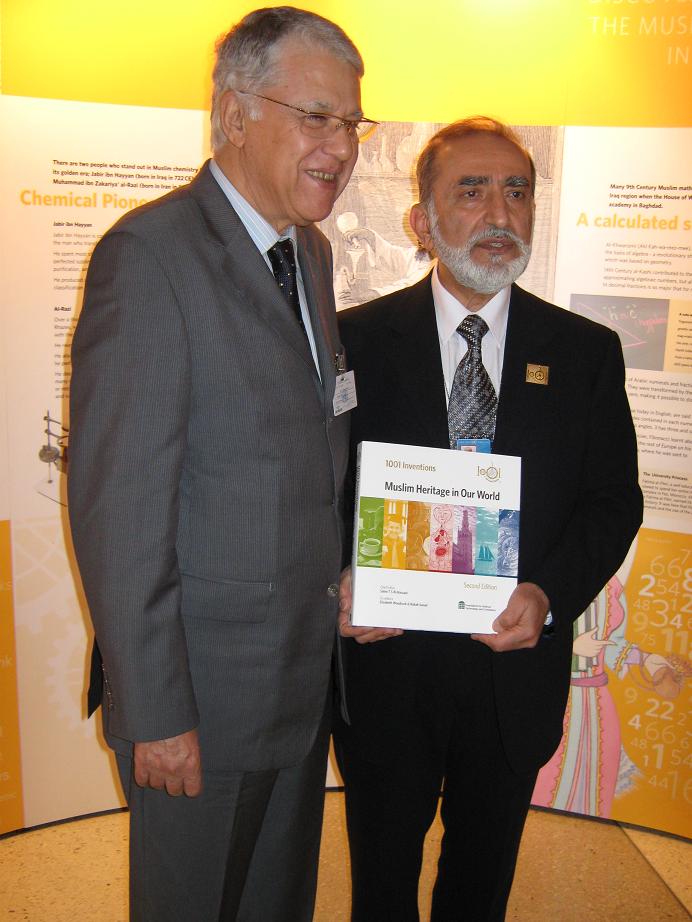 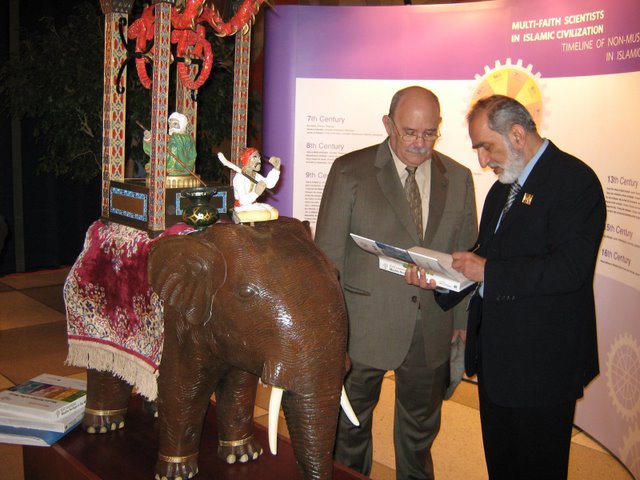 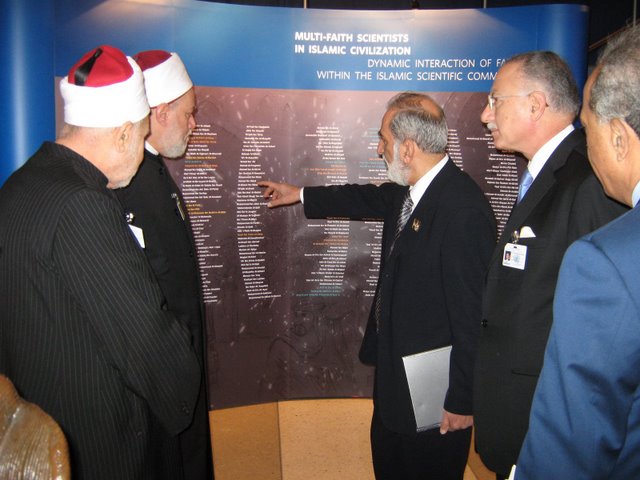 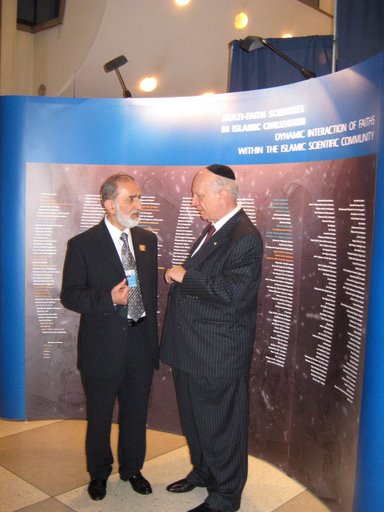 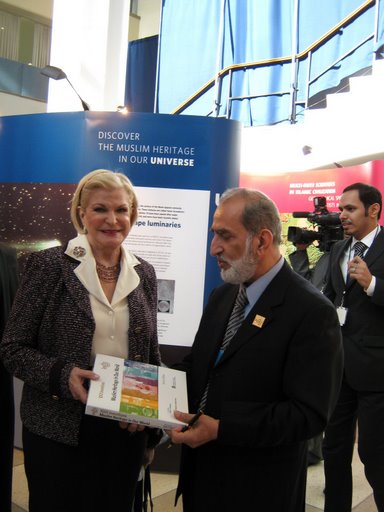 HE Ambassador of Peru to the United Nations and Professor Salim Al-Hassani (© FSTC 2008). 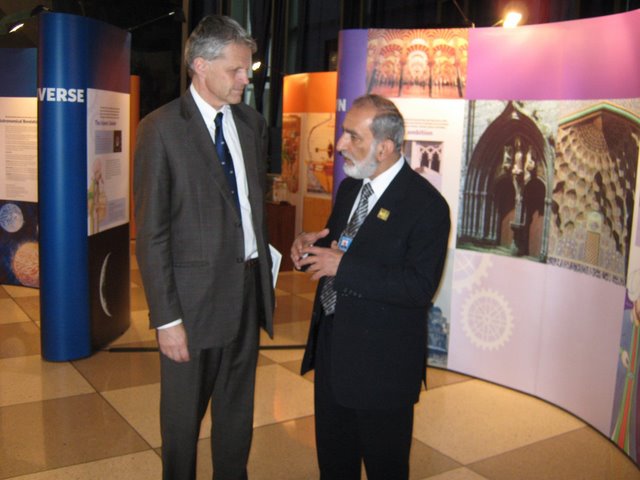 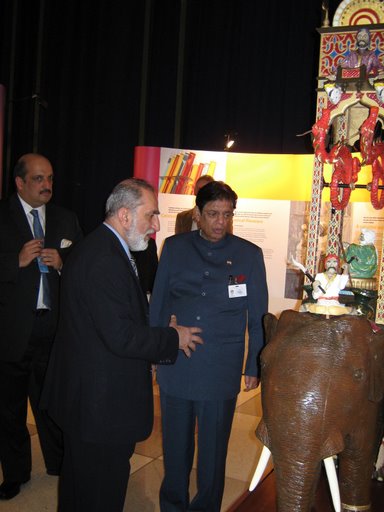 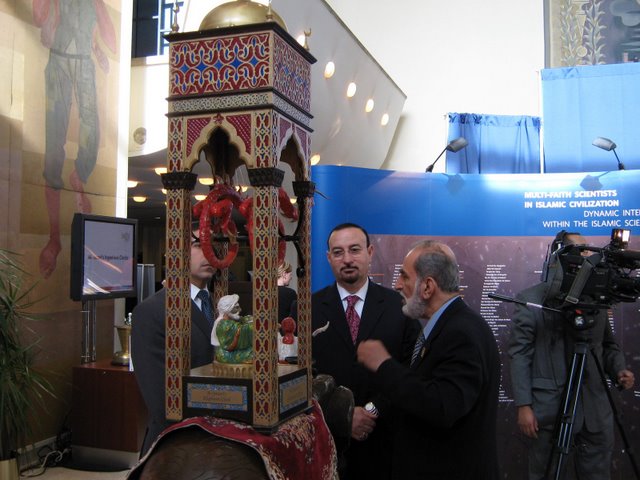 HE Iraqi Ambassador to the US visiting the display with Professor Salim Al-Hassani (© FSTC 2008). 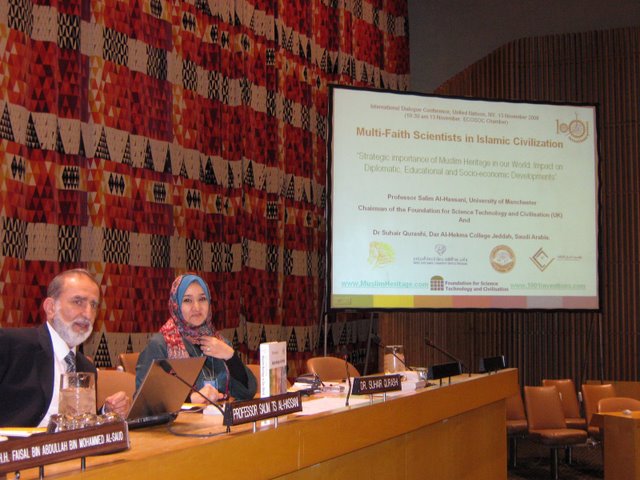 Dr Suhair Al-Qurashi and Professor Salim Al-Hassani during their lecture in the ECOSOC Chamber at the UN (© FSTC 2008).