This is a review of Health in the Ottomans (Osmanlilarda Saglik), a two-volume book concerning Ottoman medical history. The book is a brilliant achievement aiming at the reconstruction of the main aspects of the the developments and accomplishments of medical sciences under the Ottomans. 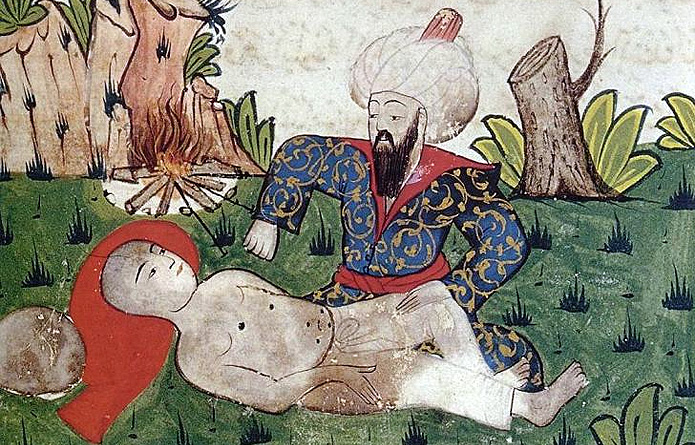 This is a review*of a two-volume book concerning the Ottoman medicine history. The editors of the book are Dr. Coskun Yilmaz and Dr. Necdet Yilmaz. In the first volume there are 23 articles written by different authors. The second volume is devoted to archival documents. The articles in the first volume contain valuable information on the Ottoman medical system, hospitals and Ottoman medical sources such as manuscripts and documents, tomb stones, etc. The book ends on a rich index.

In the following short review, we examine some aspects of this collective and rich contribution to the history of Ottoman medicine, achieved by experts in many fields of the history of medicine and intellectual history in the Ottoman period.

Despite the fact that the team work publications are the rule in history of science and medicine, as many excellent examples prove it every year in the West today, there are very few successful examples of collective works issued in the Turkish scholarship. At this time of intense cooperation with the European Union, Turkish scholars should make an effort to produce well-researched, realistic team projects in every field. These projects will not only be used by the academic world in Turkey, but they will be of benefit to the international academic world. The interdisciplinary method in education and in research should be inoculated through the education system since the primary stage, and in particular should be strongly recommended in scientific research, including humanities and intellectual history. It is this way that, in this era when professionalism has gained such importance, scholarship can produce original results in different fields.

Having seen the wonderful team efforts that have been produced in the West using Turkish archives and library materials, if we were to make a comparison, we would have to ask ourselves if we have flour, sugar, butter and good chefs, then why can we not make a decent halva? There are innumerable collective works that have been produced in the West concerning the Middle East and the Ottomans, books that have been written under the guidance of one or more editors, with articles written by academics in their specialized subjects. This is something that must be applauded. Such successful publications have begun to be produced in Turkey. The work that we are dealing with, the two-volume book Health in the Ottomans, is a wonderful example of such a successful achievement.

Health in the Ottomans is the product of a team work, in the literal sense. A large team of 40 scholars painstakingly searched the archives and libraries, among them the Presidential Ottoman Archives (Basbakanlik Osmanli Arsivi – BOA), the Topkapi Palace Museum Archives (Topkapi Sarayi Müzesi Arsivi – TSMA) and the Istanbul Court Records Archives (Istanbul Ser’iye Sicilleri Arsivi – ISSA), identifying around 10,000 documents, and then making slides and photocopies of these. Only about 1,000 documents have been reproduced in the book. If we take into consideration that 10.000 documents have been collected concerning the history of Ottoman medicine and that these documents, from almost every area, predate the 19th century, we are better able to understand the scope of this project. First the documents were transcribed into Latin letters, and then great effort was made to create unity in the orthography.

It is important to stress that the team that produced this work came from different disciplines. The publication, writing, translation and editing groups were made up of academics working in various fields, such as medical historians, and civilization, organizational, cultural, literary, social and political historians, as well as experts in modern medicine. The wide circle of participants affected in a decisive way the comprehensiveness of the approach and gave the project a powerful interdisciplinary character.

This project began with systematic research into medical history carried out by the late Professor A. Suheyl Ünver and F. Nafiz Uzluk during the Republican period, and was continued by researchers in individual articles and monographs that were written in nearly every field of medical history in the Ottoman period. As a consequence, the book was very well acknowledged by medical historians, considering rightly that it will lead to great developments in the study of Ottoman medical history. The archival documents are the most important resources for Ottoman medical history, but to benefit from them one must have a degree of knowledge about Ottoman history, diplomacy, writing styles, besides the necessary expertise in historical methodology.

Although many of the documents are located in Istanbul, the fact that a portion are located in other cities has made it difficult for both Turkish and foreign researchers to benefit from them. This work presents the results of an in-depth study carried out by a large team of experts on archival documents dated before the middle of the 18th century. Moreover, the translation of documents and articles into English has made this work easier to use than the original Ottoman medical sources.

Another contribution made by this work to medical history and academic scholarship is that in the first section, 23 articles deal with medical history, whilst the second section displays original research carried out by the experts. This section acts as an introduction aimed to orient future scholars interested in carrying out further research in this field. The main subjects of these articles are the sources of Ottoman medicine, the herbs they used, their equipment and instruments, evaluations of the records, fatwas and the foundation records, medical sciences in Ottoman institutes, medical education and the Turcification of the medical language, the foundations that provided health care and an evaluation of literature concerned with these matters.

An important feature of the book is that hundreds of original visual materials have been presented in a form that is easy for the reader to use. Many of these materials, which are an art form in their own right, are to be considered primary sources. These visual materials, attained with a great expenditure of effort on the part of the editors, were gathered from many different libraries, museums, centres and private archives. They not only give the work an added depth, but also add an extra level of interest to the two volumes.

The editors, Coskun Yilmaz and Necdet Yilmaz, endeavoured to find sponsorship for the project. Their quest was met by the generous support they found in Ismail Oncel, the General Manager of the firm Biofarma in Istanbul, who funded generously the research conducted to produce this book and to publish it. By behaving in this way, the patronage of work in history of science and medicine reminds us of the long tradition of support to knowledge, science, arts and culture that goes back to ancient times in Islamic history, including the Ottoman Caliphate. Indeed, in the Ottoman state, supporting science and culture was such a widespread tradition that the palace court, led by the Sultan, patronized scientists, physicians, artists, and various categories of scholars. It was due to such a continuous support that so much progress was made in the sciences, literature and art over centuries of creation. This well-established tradition was a significant mark of intellectual life all over the Ottoman territories, whether in Istanbul or in many cities of both the European part of the Empire and in Anatolia. Later on, during the first half of the 20th century, this tradition, naturally, was neglected. Now that Turkey regains its consciousness of its glorious past, one can wish heartily that this tradition will be supported strongly and become institutionalised in foundations, grants, etc.

Wecongratulate not only the architects of this project, the Doctors C. Yilmaz and N. Yilmaz, but also all the academics who have contributed to this work with their articles, those who painstakingly collected the thousands of records, one by one, who read them, and those who translated them into English.

Their efforts gave birth to a wonderful academic work that was planned with great care, from the intricate design of the lay-out to the cover. It is our great hope that all those who engaged their efforts in this endeavour, i.e. people who consider that a breath of good health is equal to great power, who are aware of this greatest of blessings, will remain in good health for ever.

Contents of the first volume of the book

27 A Brief Examination of the Medical Concepts of the Ottomans from the Point of View of Modern Medicine: Sabahattin Aydin

99 A General Overview of Health Services in the Ottoman Army: Abdülkadir Özcan

117 The Issue of Health in Turkish Calligraphy: M. Hüsrev Subasi

197 Inhabitants of Ottoman Residential Areas: The Insane, the Crazy and the Dead: Hayrettin Kara

247 The Herbs Used to Make Medicine in the Ottoman Period: Arif Bilgin

335 The Law and Medicine: Patient-Physician Relations in Ottoman Society According to Fatwas: Tahsin Ozcan

* This essay review is based on the introduction of the book which was written by Prof. Dr. Mehmet Ipsirli from the Fatih University in Turkey.