Mr Zakri Abdul Hamid reflects in this article the thoughts that occurred to him after visiting the exhibition "1001 Inventions" in New York Hall of Science. He concludes it by formulating a wish that the Science, Technology and Innovation Ministry in Malaysia may consider to bring the exhibition "1001 Inventions" to Malaysia to coincide with the "Year of Science" in 2012 that the ministry will organise. 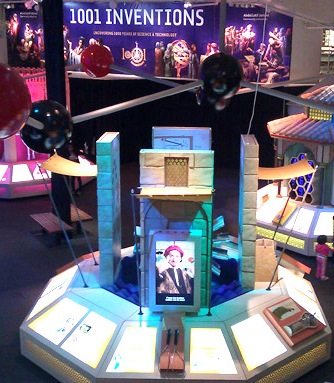 This article was published on the website of New Straits Times in 3 March 2011. It can be read online here.

AMID the current turmoil in the Middle East and the ongoing negative image of Muslims in the West, it is reassuring, on a recent visit to New York City, I was able to visit the fascinating exhibition “1,001 Inventions: Muslim Heritage in our World”. We are all familiar with the stories of 1,001 nights but less so with any that is associated with inventions. This exhibition is the brainchild of Salim al-Hassani, a former professor of engineering from the University of Manchester Institute of Science and Technology.

The contribution of medieval Muslim scholars to our modern way of life is not well known to most people, non-Muslim and Muslim alike. This exhibition brought into focus their contribution to an array of innovations that we take for granted in our society today.

Their contribution was so encompassing as to include coffee beans, torpedoes, surgical scalpels, arches or observatories. This was the time from around 600 to 1600 when Muslim scholars and inventors were pioneers in fields as diverse as medicine and mechanics, cartography and chemistry, education and engineering, architecture and astronomy. As pointed out by Al-Hassani in the book that he edited, “No area was too obscure to miss the scrutiny of enquiry backed up by rigid scientific experimentation”.

At the time when Europe was languishing in the Dark Ages, the Muslim world was thriving in its golden age of civilisation.

It has been reported that 1.6 billion cups of coffee are drunk worldwide everyday. It is odd for any household not to store a jar of coffee somewhere in the kitchen. Coffee is a global industry and the second largest commodity-based product after oil. It was discovered more than 1,200 years ago by an Arab named Khalid while tending his goats on the Ethiopian slopes, the centre of diversity of the coffee plant. The observant but sleepy Khalid noticed that his goats became excited and lively after eating the coffee berries. Boiled and prepared as al-qahwa, the popular drink soon spread to the rest of the Muslim world and found its way to Venice in 1645 and onwards to London in the late 17th century. The famous insurance company, Lloyds, was originally a coffee shop.

Among the many inventions of the 10th century surgeon Al-Zahwari were the use of dissolving cat gut to stitch wounds — before that a second surgery had to be performed to remove sutures. Many of his inventions are still in use today, such as the syringe, forceps, surgical hook and needle, bone saw and the lithotomy scalpel.

It was also reported that Abbas ibn Firnas was the first person who attempted to construct a flying machine and fly. In the 9th century, he designed a winged apparatus, roughly resembling a bird costume. In his most famous trial near Cordoba in Spain, Firnas flew upward for a few moments, before falling to the ground and partially breaking his back. This attempt was many hundred years before the Wright brothers’ feat in America in 1903.

Contrary to some contemporary views, the prominent role of women in Muslim society had been amply demonstrated in the past. For example, in 859 a young princess named Fatima al-Firhi founded the first degree-granting university in Fez, Morocco. Her sister, Miriam, founded an adjacent mosque and together the complex became the al-Qarawiyyin Mosque and University. This episode is also a testimony to the emphasis on knowledge in the Islamic tradition.

The word algebra comes from the title of a Persian mathematician’s famous 9th century treatise Kitab al-Jabr wa-‘l-mugabala or The Book of Reasoning and Balancing. Built on the roots of Greek and Hindu systems, the new algebraic order was a unifying system for rational numbers, irrational numbers and geometrical magnitudes.

Muslim scholars also pioneered the study of optics. Around the year 1,000, Ibn al-Haitham proved experimentally that humans see objects by light reflecting off of them and entering the eye, dismissing Euclid and Ptolemy’s theories that rays were emitted from the eye itself. He is credited with explaining the nature of light and vision, using what is now commonly referred to as a Camera Obscura.

As many Muslims are well aware, Prophet Muhammad popularised the use of the first toothbrush in around 600. Using a twig from the Meswak tree, he cleaned his teeth and freshened his breath. Substances similar to Meswak are still being used in modern toothpaste today.

Many of the basics of modern automatics were inspired by research done by these medieval Muslim scholars, including the revolutionary crank-connecting rod system. By converting rotary motion to linear motion, the crank enables the lifting of heavy objects with relative ease. This technology, discovered by Al-Jazari in the 12th century, exploded across the globe, leading to everything from the bicycle to the internal combustion engine.

According to Al-Hassani, hospitals as we know them today, with wards and teaching centres, came from 9th century Egypt. The first such medical centre was the Ahmad ibn Tulun Hospital, founded in 872 in Cairo. Tulun hospital provided free care — a policy based on the Muslim tradition of caring for all who are sick. From Cairo, such hospitals spread around the Muslim world.

One big question that comes to mind when one reflects on these great achievements of the Muslim scholars is how come today, we in the Muslim-majority countries that make up the membership of the Organisation of Islamic Conference (OIC) are the laggards of this world and being perceived as the source of all things backward.

There are many reasons that could be cited, of course, but one factor suggested by Al-Hassani is about the intellectual climate then. Science flourished in the Muslim world in those days because individual creativity was appreciated and science and innovation were seen by the political leadership as expanding knowledge in the interest of society as a whole.

We need to bring back those days of enlightenment which would contribute not only to our own prosperity but also make this world a more peaceful place to live in. For a start, the Science, Technology and Innovation Ministry may wish to consider bringing this exhibition to Malaysia to coincide with our “Year of Science” in 2012.

* Zakri Abdul Hamid is science adviser to the prime minister and holder of the Tuanku Chancellor Chair at Universiti Sains Malaysia.