The Thistle and the Crescent by Bashir Maan: A Book Review

Information on the long and varied relationship between Islam and Scotland that began as early as the 7th century is non-existent. The Thistle and the Crescent by Bashir Maan has been written to fill this gap. Mrs Margaret Morris reviews this book which covers the history of the relationship between Scotland and Islam, as well as an account of the experiences of Muslims in contemporary Scotland and an account of the beliefs and practices of Islam which counteracts many misconceptions. 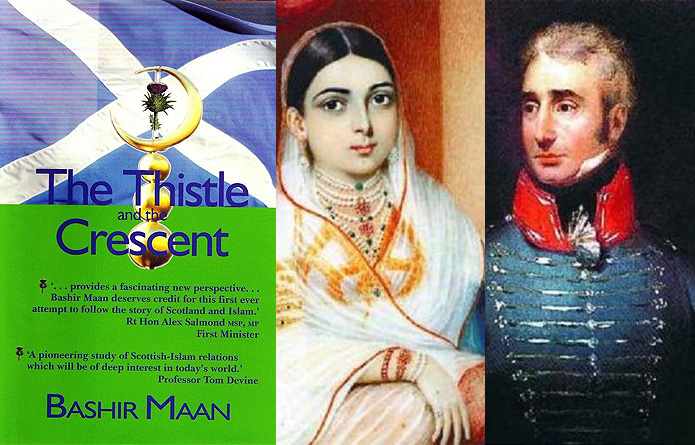 “I’m sure it would come as a surprise to most people that there may have been contact between Scotland and Islam dating back to the seventh century.…provides a fascinating new perspective…Bashir Maan deserves credit for this first ever attempt to follow the story of Scotland and Islam”. (From the Foreword written by the Rt Hon Alex Salmond MSP, MP First Minister of Scotland).

This is a very readable groundbreaking book which traces the history of contact between Scotland and Islam from the late 7th or early 8th centuries to the present day. In writing it, Bashir Maan has drawn heavily on available printed source material and where this is very scarce he has used some historical imagination and hypothesising.

The Thistle and the Crescent is divided into six chapters beginning with a Prologue that briefly examines the coming of Christianity to Scotland and the rise of Islam and its spread in the East.

The first chapter, Early Contacts between Islam and Scotland, deals with contacts through pilgrims and traders. Trade and cultural relations between Scotland, Egypt, North Africa and the Iberian Peninsula continued unhindered in spite of the arrival of Islam and Scottish pilgrims began to visit the Holy Land from the late 7th or early 8th centuries. The chapter concludes with an investigation of the probability of the visit of an embassy from Amir Abd al Rahman II, the Muslim ruler of Spain, coming to Scotland, in the wake of the Viking raids on his territories in about the middle of the 9th century.

Chapter 2, The Crusades and Scotland, discusses the impact and influence of Islam on Scotland during the four centuries of the Crusades.

Scots took part in nearly all the Crusades of the period and also performed pilgrimages. In the 15th century, Scottish crusaders fought against the Moors of Spain and the Turks in Europe. Information on some relics, traditions and stories relating to the period of crusaders and pilgrims complete the chapter along with discussion of the customs and culture adopted by the Scots. The contrast between the standards of personal, social, moral and religious attitudes of the Muslims and the crusaders is stark. Bashir Maan notes that the art of distillation is probably one of the most significant contributions of Arab culture to Scotland, being the origin of whisky, now one of the most famous and profitable Scottish exports.

Chapter 3, Diplomats, Scholars and Travellers, explores connections developed during the Middle Ages, between Scotland and Islam, thorough diplomatic relations with the Muslim nations.

The mounting Catholic threat especially from Spain during the Tudor and Stuarts periods compelled the English monarchs to seek closer relations with Muslim rulers. As a result of the good relations established, many British people were inspired to go to Muslim countries to seek employment, attracted by the better wages and conditions of service and the liberty of conscience allowed to non-Muslims. Islam’s toleration of the new reformed Christianity produced some bizarre rumours and intrigues and hopes of conversions of both Jews and Muslims. This was also the era of the North African pirates many of whose captives never returned to their homes in the British Isles, some because they did not wish to – having witnessed at first hand the rich and culturally sophisticated Muslim world.

The most positive source of contacts between Islam and the West was intellectual contact, and by the early 12th century the study of Arabic and Arabic learning had reached Britain. Renowned Scottish students, who were influenced by the Muslim universities, especially those of Spain, were Michael Scot and John Duns Scotus. In the 16th and 17th centuries several intrepid travellers made journeys to Muslim lands. Of these William Lithgow left the most extensive record of his travels in his Rare Adventures and Painful Peregrinations published in 1632 [1]. From the 7th until the 19th century, Scots had many and varied contacts with Muslims and Islamic culture, but it was a one-way traffic; there were no obvious Muslim visitors to Scotland. This was reversed during the next two centuries.

Chapter 4, The British Empire, seeks to investigate the relationships between Islam and Scotland during the 18th to the 20th centuries.

British colonial rule in the Muslim countries beginning in the 18th century provided many opportunities for the Scots as traders, administrators but chiefly as soldiers. The most important and lasting contacts were those between the Scots and the Muslims of India. Scots came to dominate the armed forces of the East India Company and the royal army in India and Scottish businessmen also did very well in India. Many of the senior officials became completed ‘Indianised’ speaking the local language and adopting local customs and costume. Both the East India Company and the British Army condoned or even encouraged marriages or relationships with local women. Some of the children of these relationships were sent back to Scotland and assimilated into the Scottish population with the result that there must be many Scots with no idea that they have Muslim ancestry. Many Scots made their fortunes in 18th-century India and returned home with their wealth, but certain Scots became fully assimilated into the Muslim culture of India. The sad tale of James Achilles Kirkpatrick, his Muslim wife and two children provides a detailed study of such a life style. After the 1857 Indian Mutiny or War of Independence, British culture was imposed on India and sexual relations between the two nations were frowned upon.

Chapter 5, Islam in Scotland, relates a brief history of the settlement of the Muslim community in Scotland, exploring the reasons why they came to Scotland, where they immigrants originated, their early experiences in Scotland and their progress and growth up to the beginning of the 21st century.

The first recorded account of the presence of a Muslim in Scotland is that of a Turk, Ishmael Bashaw, who came to Britain in the late 18th century. Sad to relate, although he converted to Christianity, he did not enjoy the tolerance and kindness shown to many Christian travellers in Muslim lands. The second half of the 18th century and the 19th century saw a steady trickle of Muslim servants and seamen coming to Scotland. Some settled and took what work they could obtain. In the 1920s and 1930s many were working as peddlers but by the 1950’s many worked in factories or in transport. Until the mid-1950 immigrants usually intended to return home and did not bring their families to settle. Families arriving changed the pattern of life of the Muslim community in the second half of the 20th century. Business men diversified into other areas, a Scottish born generation grew up, were educated and entered the profession, mosques were built and Muslims took their place in community life.

The final chapter, What is Islam?, briefly explains the essence of Islam, its way of life and the close relationship between Islam, Christianity and Judaism. Bashir Maan hopes that this description of the fundamental beliefs of Islam will dispel myths and misconceptions and bring about a better understanding of the faith and its adherents.

Bashir Maan arrived in Scotland from Pakistan in the early 1950s as a student and quickly became prominent as a spokesman for the growing immigrant group. He entered politics and became the first Muslim city councillor in the UK, when in 1970 he was elected as a member of Glasgow City Council. He has served as a magistrate of the city, as a District Court Judge, as Deputy Chairman of the Commission for Racial Equality, as President of the Scottish Council of Voluntary Organisations and as Convenor of Strathclyde Joint Police Board. He allowed his Labour party membership to lapse over the Iraq invasion in 2003.

* Margaret Morris is copy editor within FSTC and member of the editorial team within www.Muslimheritage.com.

The Thistle and the Crescent by Bashir Maan: A Book Review