Dr Salim Ayduz, researcher at FSTC, presented on Tuesday 9 February 2010 a conference on the Muslim contributions to modern civilisation in the "Islam Awareness Week 2010" organised by Lancaster University's Islamic Society. We present hereafter an abstract of this important conference, attended by dozens of students, with resources. 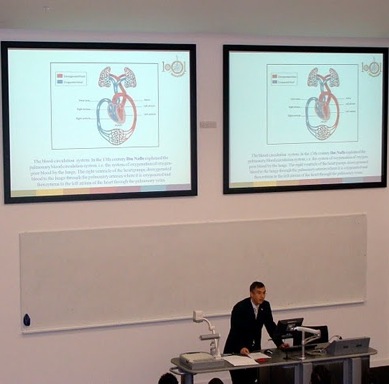 Dr Salim Ayduz, researcher at FSTC, presented on Tuesday 9 February 2010 a conference on the Muslim contributions to modern civilisation in the “Islam Awareness Week 2010” organised by Lancaster University’s Islamic Society. We present hereafter an abstract of this important conference, attended by dozens of students, with further resources.

In his talk, Dr Salim Ayduz presented a survey of the achievements of Muslim scholars between 700 and 1700 CE, with particular focus on what modern life, and scientific and technological developments, owe to Muslim scientists of the past. The scientific and cultural achievements and contributions of Muslim civilisation started within, and continued throughout, the medieval period for more than a thousand years. However, many people have no knowledge of the scientific and technological contributions of the Muslim and non Muslim scholars living in the Muslim world during this period. Even in this modern age of enlightenment, few people, including Muslims, are aware of their significant contributions to the progress of humanity.

In medieval Europe, the light of scientific inquiry had largely been extinguished with the collapse of the Roman Empire. But it survived, and indeed blazed brightly, elsewhere.

From Muslim Spain across North Africa to Damascus, Baghdad, Persia and all the way to India, scientists in the Muslim world were at the forefront of developments in mathematics, astronomy, engineering, medicine, chemistry, map-making and exploration.

During the 1000 years between 700 and 1700 CE, Muslims established scientific institutions such as observatories, libraries, schools, and hospitals, and contributed with new scientific and technological innovations to the global civilization.

Based on a Power Point presentation, the lecture presented by Dr Ayduz in Lancaster University surveyed the various aspects of Muslim contributions within the history of science and technology.

Dr. Salim Ayduz was born in Turkey. In 1986 he attended the Istanbul University’s History Department. Within his graduate work at the History of Science Department, he specialized in the history of Ottoman Science and Technology. He then taught for four years at Fatih University, Istanbul. He concentrated all his scholarly attention to the History of Science of the Ottoman period as well as general Islamic science. Dr. Ayduz published many scholarly articles in his field and also attended many national and international symposiums in which he presented original papers.

Since 2002, Dr. Ayduz has been working as a senior researcher at the Foundation for Science, Technology and Civilisation (FSTC) and 1001 Inventions Initiative in Manchester, and as a visitor scholar at the University of Manchester since 2003. He recently contributed to the “1001 inventions: Discover the Muslim Heritage in our world” book under the editorialship of Prof. Salim Al-Hassani with eminent scholars. He also helped to preparation of the touring exhibition entitled “1001 inventions”. He is a member of the FSTC and Turkish History of Science Society in Istanbul.