In the Fort Nelson Museum a huge bronze cannon sits in the court yard. Cast in two peices in 1464 by the order of the Sultan Mehmed II, no such split guns existed in Europe before then. How did it end up in London? And why is it so unique?

There is a huge bronze cannon in the Fort Nelson Museum. It is cast in two pieces, chase and breech, the two parts screwed together. It is reported that the Ottomans cast such split cannons in 15th and 16th century for ease of transportation. No such split guns had existed in Europe before then. This gun had devastated ships attempting to breach the Ottoman seas.

How did it end up in London?
And why was it unique?

This novel cannon was cast in 1464 by the order of the Sultan Mehmed II. He was very interested in firearms, especially in cannons. During his siege of Constantinople, he ordered his cannon master to cast large cannons which had never seen before. His artillery group was populated with skilful designers and engineers, including such names as Saruca Usta and architect Muslihiddin Usta. It also included non-Muslims, such as Urban, who were dissatisfied with the poor treatment they received from the Byzantines. The split cannon can be assembled in-situ after transportation in separate parts. It weighs 18 tons and has an overall length of 5.23m and a diameter of 0.635m. The length of the barrel is 3.15m and the gunpowder reservoir is 0.248m in diameter. 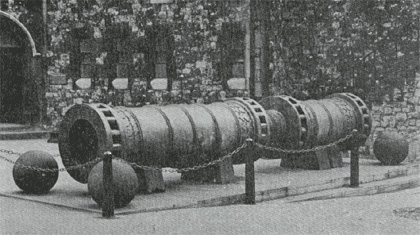 The breech in this cannon is shorter and slightly smaller diameter than the chase. Both parts are cast with prominent double mouldings at either end which are joined longitudinally by sixteen crosspieces to form an equal number of sockets for the insertion of the levers used in screwing or unscrewing the two parts. The rest of the length is divided by rounded mouldings, five on the chase and three on the breech. The surface between the outermost of these mouldings and the prominent mouldings at the ends is filled with two interlocking bands of formalised flower of leaf ornament, one raised, the other sunken. The muzzle is inscribed in Arabic writing:

Near the vent are engraved instructions for loading giving diameter, muzzle, shot size and weight and charge weight. 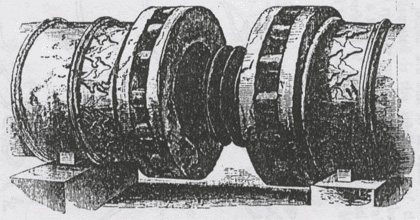 In an article on this gun, General Lefroy stated that the engraved inscription was a modern addition, basing this view on the fact that the powder chamber would in fact hold a powder charge of 150 lb, which is much more than that inscribed on the cannon. The reason is thought to be due to the improved and stronger powder of the early 19th century. For firing, it was mounted on wooden beds with large wooden recoil bed behind it. Such guns were capable of firing across the Straits, i.e. over a range of one mile. In the Dardanelles War, the cannon struck six ships of the fleet of Sir John Ducksworth. At the time, the cannon was positioned in Kilidbahir Castle.

There is a long story to tell of how this cannon ended up in the Fort Nelson Museum. In short, however, after repeated failed attempts by the English, for 60 years to convince the Ottomans to sell it, Queen Victoria personally requested it from Sultan Abdulaziz during his visit to Europe. One year later, the Sultan sent it as a gift. It was transported from the Dardanelles to London and was placed in the Museum in 1868. Foulkes claims that the reason of this request was “to get the most important cannon of Europe”. In 1929, the gun was transferred from the Rotunda Museum, Woolwich, to the Tower of London Museum, then to the Fort Nelson Museum where it now rests.