This public lecture was organised jointly by the Royal Society and FSTC. It traced the stages in the discovery of Arabic culture by European scholars from the early middle ages until the early-modern period. 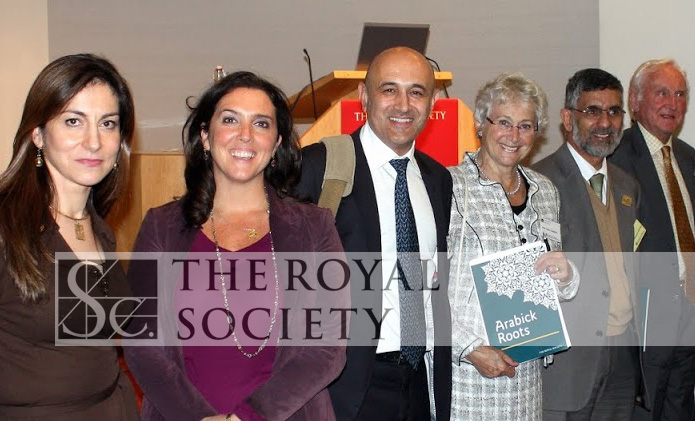 This public lecture was organised jointly by the Royal Society and the Foundation for Science, Technology and Civilisation (FSTC). It traced the stages in the discovery of Arabic culture by European scholars from the early middle ages until the early-modern period.

Reception (5.30-6.00pm)
Celebrating 12 years of a journey: Uncovering the Past to Built a Better Future

Prof. Charles Burnett giving his lecture at The Royal Society

The subject of the influence of Arabic/Muslim culture on Europe is becoming increasingly important in today’s socio-political-economic environment. The cultural roots of science, technology and art can play a significant role in enhancing inter-cultural respect.

In his lecture, Charles Burnett traced the stages in the discovery by European scholars of Arabic culture from the early middle ages until the early-modern period, through their translations of secular and religious works from Arabic into Latin. He addressed questions such as:

It’s a great pleasure to welcome you to the Royal Society this evening to hear Professor Burnett’s lecture and to see the wonderful exhibition, which I hope you may have time to see afterwards, which the exhibition curator Dr. Rim Turkmani will show you later in the evening.

Now, as Jim’s just said, I’m foreign secretary of the Royal Society and my brief from the 1663 charter, the 1663 charter which was three years after the Society was founded, it said that Fellows had to go out and have affairs with all manner of foreigners… well, it’s been a very good job for the past five years, I have to tell you!

Well the early Fellows were not just interested in living scientists, but in the giants of science that went before. When the Society was founded, as I said in 1660, 350 years ago, the Fellows were not content to just think about science: they were experimentalists. They had to carry out experiments and make observations. Their motto, as it still is, was nullius in verba, which sort of loosely translated, is “take no man’s word for it”. From the very beginning, they were interested in the observations and experiments of others, of course, which is why they were so interested in the Arabic and Persian manuscripts arriving at that time in England and describing so many experiments and observations, some written by scholars living centuries before. And not content with translation, they wanted to read them in the original script. The most famous chemist at that time, Robert Boyle, had studied Arabic for other reasons, but he was able to use this knowledge and that of his friends, who were familiar with Arabic and Persian, to read many treatises. Edmund Halley, the astronomer, learned Arabic when he was 50 because he had spotted errors in a Latin translation he was reading. The Royal Society does not just elect Fellows from the UK and the Commonwealth, it always elects foreign Fellows each year, who we always welcome, but it is interesting to note that the Society elected three Arabic Fellows in the 17th and 18th centuries.

I should like to thank the Foundation for Science, Technology and Civilisation(FSTC) and the Qatar Foundation for sponsoring the curating and research of the Arabick Roots exhibition, and of course that was done by Dr Rim Turkmani, who will show you round later, and I also think this is a really wonderful occasion for us to meet together and hear about the Arabic world.

?The next part of the journey

Dr Rim Turkmani is a Dorothy Hodgkin Research Fellow of the Royal Society and FSTC. She works at the Astrophysics group at the Imperial College London. She also specialises in the impact of the Arabic science on the scientific revolution, and has conducted original research in this area which was developed into the ‘Arabick Roots‘ exhibition. Having studied and worked as a scientist in many countries, including her home Syria, she has particular appreciation of cultural diversity in science and the importance of dialogue in the making of modern science.

Exhibition Curator Dr Rim Turkmani said: “This exhibition uncovers the never-before told story of the connections between the early Royal Society and contemporary and classical Arabic learning, and how they were used to solve some of the most pressing problems of the day.”

“This was a time when British society as a whole was largely ignorant of the cultural achievements of the Arabic world – yet we find that the early Royal Society’s group of ‘ingenious and curious gentlemen’ included three Fellows from the Arabic world. This forgotten history reveals a rich tradition of communication between two very different cultures, and shows that then – just like today – collaboration across linguistic and cultural boundaries can lead to great results.