In the following short report, we present a summary of the lecture presented by Professor Peter Adamson in the Muslim Heritage Awareness Group (MHAG) meeting organized by FSTC in London on 30 March 2011. In his lecture, Professor Adamson spoke about the research project he is currently running in the Philosophy Department at King's College in London: "Natural Philosophy in the Islamic World." The project aims to explore the broad notion of "natural philosophy" in Islamic philosophy, especially in the crucial period of the 9th-10th centuries CE, when Ancient philosophy was appropriated and naturalized in the linguistic and intellectual Arabic and Islamic context.

Professor Peter Adamson spoke about the research project he is currently running in the Philosophy Department at King’s College in London, entitled “Natural Philosophy in the Islamic World.” This project is funded by the Leverhulme Trust. The project is devoted to several areas in which the KCL Philosophy Department has long-standing expertise: ancient philosophy, medieval philosophy, philosophy of medicine, and philosophy of science. In particular it will look at the broad notion of “natural philosophy” Muslim world, especially in the 9th-10th centuries CE (see Peter Adamson’s Leverhulme funded project on Natural Philosophy in the Islamic World).

The main questions to be studied in the Project will be:

(1) How was natural philosophy understood to be a single branch of science, given its diversity?

(2) As a special case which sheds light on this larger issue, what was the relation between philosophy and medicine?

(3) How did Greek ideas about natural philosophy penetrate into the Islamic world?

(4) What alternatives were there to the mainstream Aristotelian approach to natural philosophy?

Figure 3: Introductory pages of the manuscript of Ilahiyat Aristutalis (Theology of Aristotle), the work of Plotinus in Arabic translation that was edited by Al-Kindi (Naskh script, 398 pages). (Source).

As part of the project, Professor Adamson has launched a podcast covering the history of philosophy, “without any gaps.” This will in due course cover Islamic philosophy, though as it is chronological the first two years or so will deal with ancient philosophy. The podcast website is https://www.historyofphilosophy.net.

Figure 4: An old drawing of Avicenna from a manuscript dated from 1271 CE. (Source). 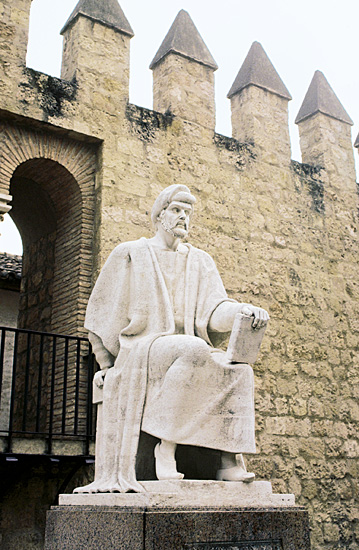 2. Articles about Islamic philosophy on MuslimHeritage.com