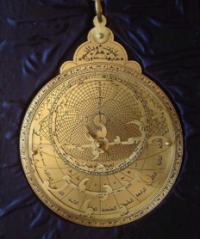 From the beginnings of human awakening people have pondered at the amazing canopy of stars, and at the movement of everything in the sky. Clearly there was order in the heavens. Many attempts were made to identify the patterns in this order. This bought great significance to life, since through these observations and derivations of rules we have the beginnings of predictive science. We can predict the position of the Sun in the sky, the Moon, the timing of eclipses, the changing position of the planets and the stars. In an attempt to make these predictions easier, people deriving from numerous great Civilisations have built different kinds of models reflect in a physical form what they have observed. These models were built based on the perspective of the earth with a sphere of stars surrounding it.
There were several kinds of models:

Muslim Astronomers inherited much from Greek astronomical calculations and models, then later improved on them in several ways making the measurements and predictions more and more accurate.

These were used to give observers a representation of the sky, dependent on the observer’s location and time of day (position of the sun). This then enabled astronomers to use a consistent coordinate system and to solve problems involving stars and other heavenly bodies.

Many celestial globes were constructed up to the point of the sixteenth century, and many still exist today. However, none prior to the eleventh century have survived.

Using stereography, celestial spheres were enabled to be projected on to a 2D plane and form the important body of an astrolabe. These astrolabes were based on the ecliptic, and divided into 12 portions. Further, each portion was given a sign of the zodiac.

The astrolabe has many applications, such as working out heights of inaccessible objects, time of day and its position on earth. This is all done by the use of ingenius tables and figures that are imprinted on both sides of an astrolabe.

Armillary Spheres used rings to represent the circles of the celestial body, i.e. the equator and ecliptic. They did not chart the stars, rather were more concerned with planetary movement and position. Armillary Spheres were not made with a solid sphere, but with several concentric rings connected in such a way to mimic the rotation of the earth and its surrounding bodies.