The crucial, most fundamental, difference between Islamic and secular Western science is that Islam and Muslim Civilisation both reached their apogee in the same centuries. 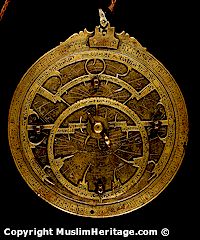 Summarised extracts from a full article:
Islam and Science by Salah Zaimeche

“Read: In the name of your Lord Who creates – creates man from a clot. Read: And your Lord is the Most Bounteous, Who teaches by the use of the pen, teaches man that which he knew not.” Quran 96:105

The crucial, most fundamental, difference between Islamic and secular Western science is that Islam and Muslim Civilisation both reached their apogee in the same centuries.

At no other time in their history, and under no other circumstances, have Muslims achieved anything of similar proportion than in that so called golden era (800-1200). Then, once Islam’s power retreated in both its eastern part (the taking and sacking of Baghdad by the Mongols in 1258), and its western part (the taking of Cordoba: 1236; Valencia: 1238; and Seville 1248 by the Christian armies in Spain), its civilisation retreated too. From the mid 13th onwards, Islamic civilisation only lived in faint outbursts. Its centres of learning, its scholars, its books and libraries having become prey to destruction, it was now unable to mount the coherent, sustained scientific effort achieved in times when the Muslim land was somehow secure and powerful. Another element of difference was that if Western science developed outside a religious frame, Islam, as expressed in numerous Quranic verses and Prophet’s sayings, acted as the source of inspiration for such a thrust.(endnote 1)

In contrast to Islam, religion and modern Western science seem to meet in the theatre of conflict only. This has origins that are centuries old, during the apogee of Christianity, when burning of dissenting individuals, scores of them scholars (Bruno, Huss, Servetus…), was widespread. The Church banned science but not because of the religious text itself, as Bucaille explains, science instead being hampered by those who claimed to be the Church’s servants, and who acted on their own initiatives.(endnote 2)

Until the so called `modern times,’ to avoid burning at the stake, scientists in Christian Europe had to forsake scientific truth, or recant their views, Galileo being the best example of that. Gradually, though, science and religion were dissociated. In historical terms, the so-called European scientific revolution only took place once the authority of religion had loosened, from the seventeenth century onwards. And by the nineteenth century, `scientists’ could venture with any idea, however antagonistic, including Darwin’s evolution theory, which completely denies any Divine role in creation.

Today, the separation is total; and to assert that one is a believer in God in learned Western circles is tantamount to heresy. The whole matter had gone full circle.

The Next Golden Age? Using History to Inspire Science Today