Ahmed Hassan Zewail, born in Damanhur, Egypt 1946, a graduate of the faculty of Engineering, Alexandria University, moved to the USA for his postgraduate education. He developed an interest in using lasers to study chemical reactions at miniscule time periods (i.e. 10-15 sec). This field which has become to be known as femtochemistry had a profound effect on both chemistry and biology, aiding in the development of new materials and providing new insights into the way the human body works. Zewail’s pioneering research earned him the Nobel Prize for Chemistry in 1999, but he continued his search for more knowledge.

His latter work on electron microscopy brings to mind another pioneer who lived in Egypt. It was over a thousand years ago when Alhasan ibn al-Haytham moved from Basra, (modern-day Iraq) to Cairo, Egypt in pursuit of knowledge, or perhaps as has been suggested to realise the challenging project of regulating the flow of the river Nile.  Historians of science still debate why he was unable to carry out his work, his early life in Egypt. Instead, ibn al-Haytham turned his attention to the study of light and the mechanism of vision. In so doing, he wrote a monumental manuscript in seven volumes; the Book of Optics (Kitab al-Manazir in Arabic) that earned him the title “the father of modern optics”. In this book, Ibn al-Haytham reported the development of an experimental tool to study the properties of ray optics consisting of a dark chamber, (albeit al-muzlim, in Arabic) which we now call the camera obscura or more precisely the pin-hole camera. This simplistic device gives one static images of objects albeit at low spatial resolution (of sub-centimtre). The camera obscura, however, has been the foundation underpinning all imaging devices that were subsequently developed. Today static images can be collected at spatial resolutions of sub-angstrom (10-10m), i.e. sub-atomic in size, as in transmission electron microscopy. 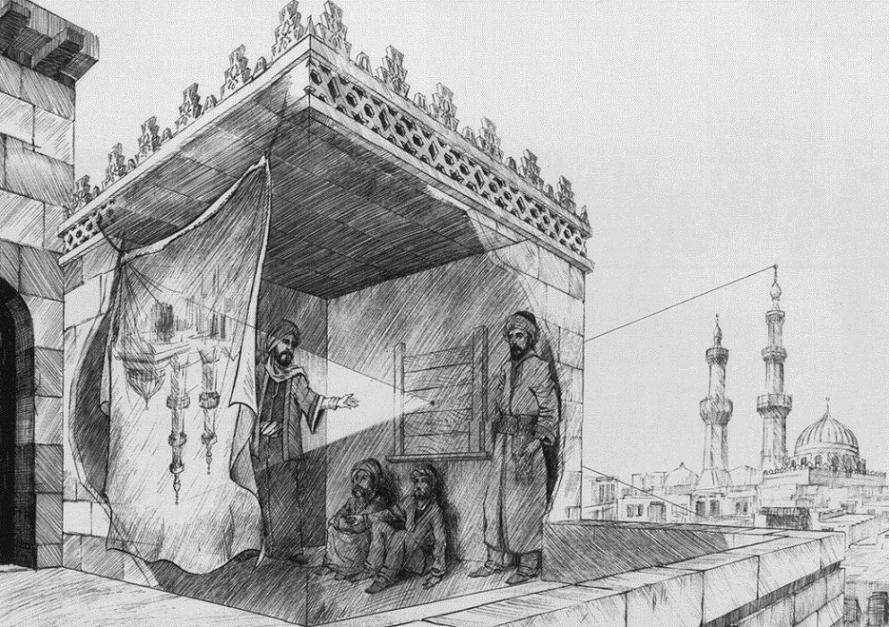 Figure 2. Ibn al-Haytham’s Camera Obscura. The concept of the Camera Obscuraas perceived a thousand years ago by Ibn al-Haytham, who coined the Arabic term. Note the formation of the inverted image through a ray diagram. Illustration of theCamera Obscura in 1001 Inventions: Muslim Heritage in Our World (chief editor Salim Al-Hassani), Manchester: FSTC, 2008, 2nd Edition, ISBN: 9780955242618, p. 29. See also The Year of Ibn al-Haytham (published 15/02/2011) and Ahmed H. Zewail,Micrographia of the twenty-first century: from Camera Obscura to 4D microscopy(The Royal Society, 2010).

Zewail extended his laser-matter interaction technique into electron microscopy where he was able to shine a laser beam onto the electron source of a microscope thus releasing a packet of electrons at a short space of time. This pioneering method resulted in a further small, but crucial improvement in the microscope’s spatial resolution (i.e. sub-atomic scale) as the released packet of electrons have little time to interact with each other which normally causes an unwanted spread in their energy. This spread in electron energy leads to a worsening of a microscope’s spatial resolution via a deterioration of its chromatic aberration. If one, however, collects a series of sequential images each at the femtosec timescale, one could then for the first time observe natural phenomenon occurring at spatiotemporal resolution. This is what Zewail demonstrated thus giving the world a new class of microscopy: the 4D microscopy.

Ahmed Zewail passed away on the 2nd of August, 2016, after a long battle with cancer for which he received treatment in the last few years. Ironically, 4D microscopy techniques are today being used by some researchers studying cancer cells, although a cure, which would have saved this eminent scientist’s life remains elusive. Despite his illness and the intensive and exhaustive treatment that he was subjected to, Ahmed Zewail continued to respond positively to public engagements. Last year, I was delighted to hear him again in his keynote speech at the UNESCO headquarters in Paris, France, marking the International Year of Light and the world of Ibn al-Haytham. He also kindly agreed to write a chapter in a forthcoming book I am honoured to co-edit on the same theme to be published by Springer 2016 (Eds: Alamry, El-Gomati a Zubairi). Figure 3. 4D electron imaging in real, Fourier and energy spaces. The conceptual design of Caltech’s UEM-2 is presented on the right; a single-electron trajectory is depicted within the UEM. The atomic-scale (femtosecond) temporal resolution characteristic of the apparatus allows for the visualization of dynamical processes in real time. Shown on the left are typical UEM frames of real-space images and diffraction patterns, together with three-dimensional maps of femtosecond-resolved electron-energy-loss spectra (FEELS). For a recent review, seeShorokhov & Zewail (2009).

Zewail continued to urge the developed states to allocate more funds for education to raise the living standards of its citizens and to cater for its future generations. He told me in a visit to the University of York in 2009 at a public discussion on what one should do to bridge the educational gap between the Arab and Muslim world and the west in terms of education that he will not compromise on the governing of universities; this, he stated emphatically, that such endeavours should be independently run by educationalists and free of any political interference, a policy I wholeheartedly concur with. This level of integrity resonated well with my reading of earlier Muslim scientists, ibn al-Haytham is one to note, who once said about himself that: “His methods will involve criticising premises and exercising caution in drawing conclusions” while he aimed “to employ justice, not follow prejudice, and to take care in all that we judge and criticise that we seek the truth and not be swayed by opinions”. Figure 4. Microscopy time line, from camera obscura to three-dimensional electron microscopes. 4D ultrafast electron microscopy and diffraction were developed a decade ago. The top inset shows the frontispiece to Hooke’s (1665) Micrographia published by the Royal Society of London. In the frontispiece to Hevelius’s Selenographia (bottom inset), Ibn al-Haytham representsRatione (the use of reason) with his geometrical proof and Galileo represents Sensu (the use of the senses) with his telescope. The two scientists hold the book’s title page between them, suggesting a harmony between the methods (Sabra 2003; Steffens 2006; Zewail & Thomas 2009).