On 11 February 2020 an event entitled " In Conversation: Who Owns Science?” was organised by the Science and Industry Museum (MSI), Castlefield, Manchester. It was a panel conversation on "How has Britain's history as a scientific and industrial leader been influenced by its imperial past?” 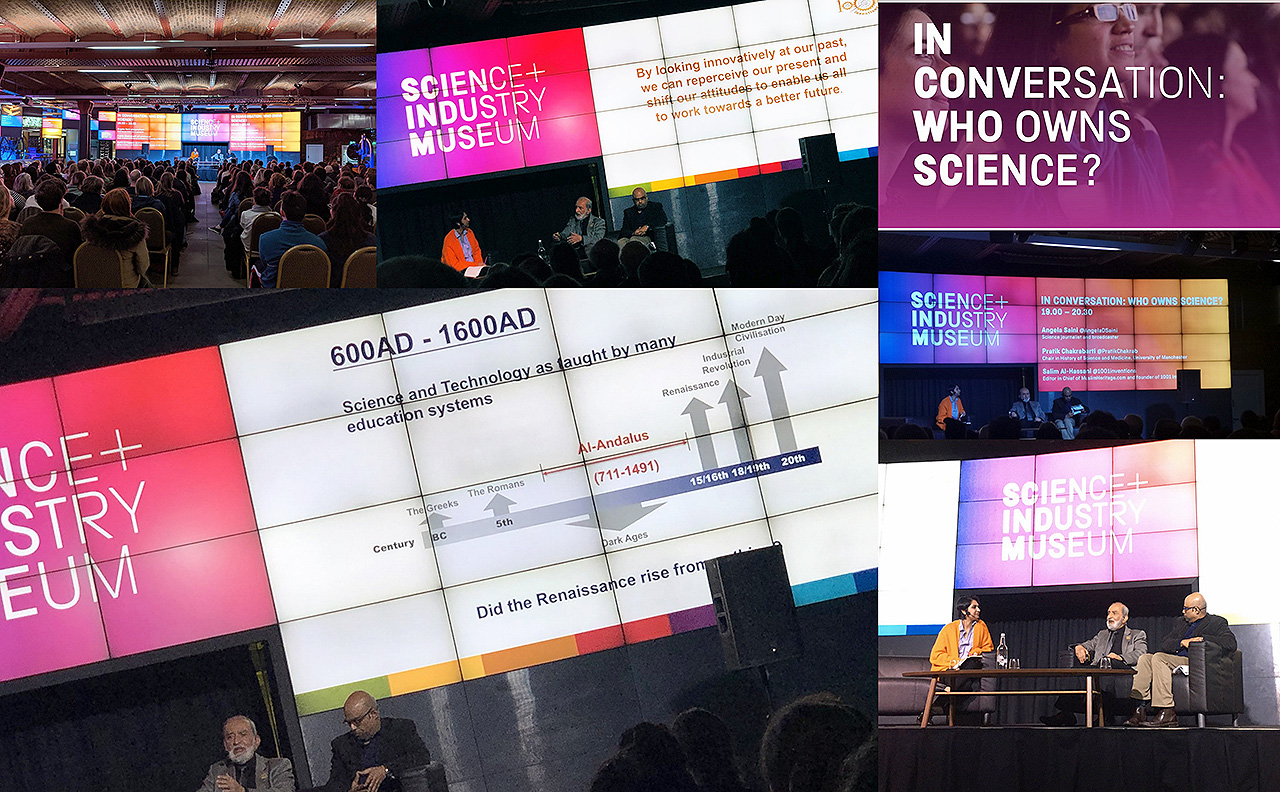 The panellists were: Science journalist Angela Saini joined by historian Prof Pratik Chakrabarti ( Director of CHSTM) and Prof Salim Al-Hassani  (President of FSTC). They addressed the question of Who Owns Science. The event was oversubscribed and became social media sensation overnight, see some of the comments below. Of particular interest were the slides shown by Professor Al-Hassani revealing how science books in schools and public memory overlook more than a 1000 years of contributions of men and women from various civilisations. One of the slides shows a popular history timeline of women in science, which also reveals a similar gap, see below. This amnesia is thought to generate a sense of superiority in European societies and at the same time engenders inferiority complex in other societies. It is thought that these historical gaps should be filled in by introducing male and female scientists from the Muslim world, China and India who were pivotal in the early development of science.

What a great evening! Sold out event @sim_manchester discussing who owns science with @AngelaDSaini, @PratikChakrab and Salim Al-Hassani from @1001inventions. pic.twitter.com/nAKkkgZlKe

“5th Century and then *whoops!* we’re in the Renaissance” – did the the Renaissance rise from nothing? #HistSci #DarkAges #WhoOwnsScience pic.twitter.com/XJRyRYk7Mt

Thank you to @AngelaDSaini Salin Al-Hassani & @PratikChakrab for your sharing your conversation and insights around the complicated & controversial topic of #WhoOwnsScience & for raising a few more hidden voices in history. pic.twitter.com/JKJQ5MYjoy

Attended Who Owns Science panel at Science and Industry Museum with two #TechUpWomen graduates (@nieniedoo & @Kirstydevlin1 🥰🚀) that coincided with #WomenInScience Day. @AngelaDSaini is an amazing lead panelist and been reflective today on the talk. (1/2) pic.twitter.com/pL9mhwZy4e

So much food for thought tonight. Who owns science? How do we produce knowledge and is it democratic? Who decides what’s published? Completely agree w/ @AngelaDSaini statement that researchers should be trained in thr social and historical context of science or their field 👏🏿👏🏿💜 pic.twitter.com/NIr7ayb30S

Cities of Light – The Rise and Fall of Islamic Spain

HISTORY’S MOST FAMOUS CODE CRACKED BY A MUSLIM!!

Intro to “The Story of Maths: The Genius of the East”

5 Weapons Used by the Ottomans

The Muslim who mastered the Mind – Al Balkhi