"Cybernetics: Past, Present, Future" published by Toygar Akman, a renowned expert in the field, retraces for the Turkish readers the history of cybernetics and presents the state of the art in this revolutionary scientific field. The author, an admirer of al-Jazari, the Muslim engineer of the early 13th century, devotes a section to describing his outstanding, early contribution to the history of robotics 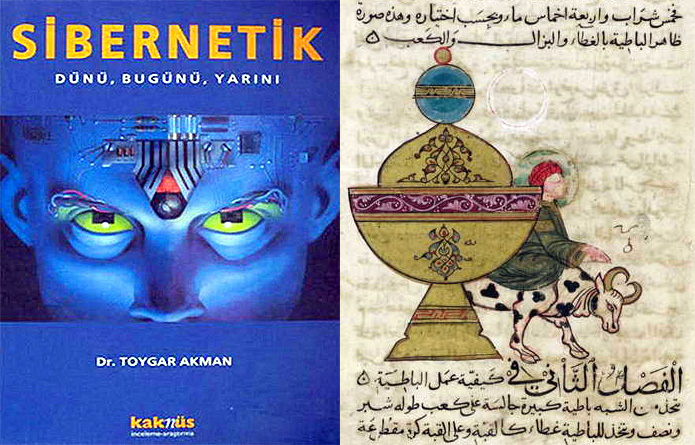 Dr. Toygar Akman passed away before we published this book review. The following article is a small tribute to his memory.

Dr. Toygar Akman, author of many books and more than a hundred articles on cybernetics, recently published a book in Turkish on the history of Cybernetics, Cybernetics – Past, Present, Future (2003). 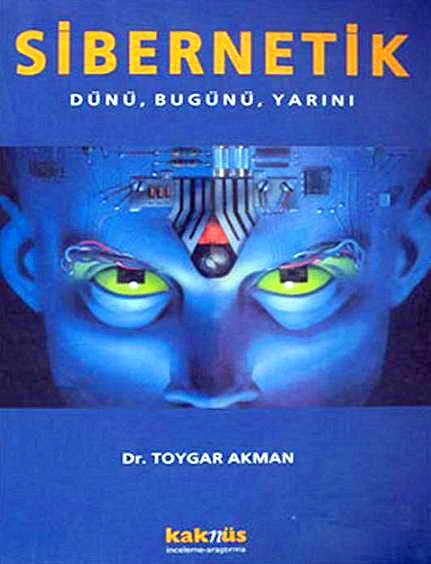 Figure 1: Front cover of Cybernetics – Past, Present, Future (in Turkish) by Toygar Akman

The word “Cybernetics” derives from Kubernetes, meaning the art of managing. It was used by Plato as a substitute for the word helmsman in ancient Greek.

The modern use of the word derives its meaning from the American Professor Norbert Wiener, who used it in an article written with Bigelow and Rosenblues, two scientists whom he met at a meeting in 1943. Cybernetics suggests that the communication of information between the organs in organisms can also take place between machines.

The field of study encompassed by cybernetics is the use of any machine, either organic or not, in managing any work or achieving any target. It also refers to the communication of information within the tool itself. It has a very wide range of usages, from the cell instructing itself to a machine operating. 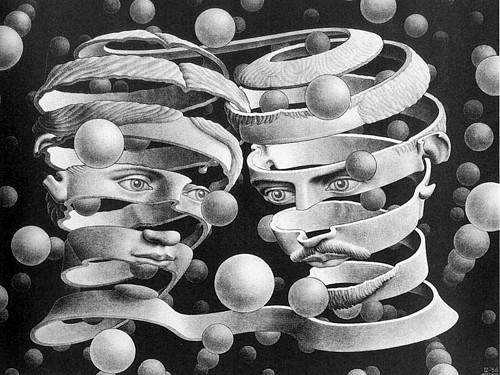 The chapter also includes some material about the origins of the word Cybernetics, the feedback mechanism of the nervous system, and the application of this mechanism to machines. Also included is the “Turtle on the Beam” established by Grey Walter – the balance system by communicating with the light – and the work of Ross Ashby on the establishment of balancing.

The second chapter is entitled “From automatic calculators to numerical machines” and “From electronic brain systems to machines that can think”. The advances in that field are emphasised, as electronic calculators and the technology of robotics have made a major contribution to the improvement of Cybernetics. In this chapter, it is noted that the “abacus” led the way to operating flawless balance in machines. Then Pascal’s mechanic calculator, Leibniz’s adding-subtracting machine, the analyzed motor that Babbage worked on for many years, Monroe’s and Marchant’s calculators, and Herman Hollerith and his electrical chart are examined one by one and pictures are included. 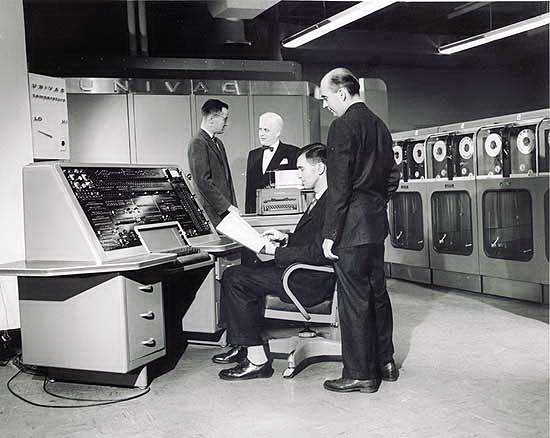 Figure 5: The first computer to implement Von Neumann’s idea was the EDVAC in 1951 (Source)

The chapter ends with ZUSE (calculation machines), ENIAC (the first electronic computer), EDSAC (electronic computer), UNIVAC and computers with Fortran systems. At the end of this chapter are the big developments like improvements in speed of upload, quicker calculation, bigger memory, establishing various balances, minimising data to smaller units, establishing communication webs between systems, establishing data reliance between machines, remote controlling and remote management together with the creation of computers. 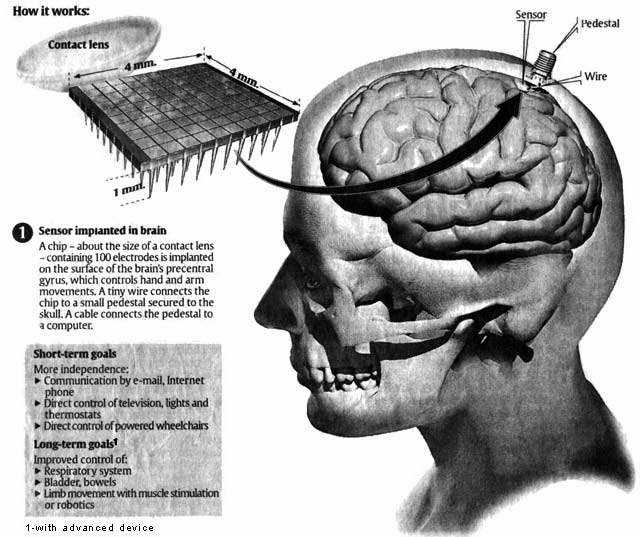 The third chapter is called “From Toy Robots to Cybernetic Robots”. The topic begins with the first automatic devices saying that humans first made toy devices and then started to benefit from them. In the first part on the history of robots with information from old Egyptian, Indian and Chinese writings, is described the device playing melodies and powered by sunlight, which was created by the Egyptian pharaoh Amenhotep. The live sculptures of Daidalos, the flying woodpecker made in ancient China, the walking horse, the puppet orchestra, the cat that catches the rat, the automatic otter and toys like these have also been mentioned. 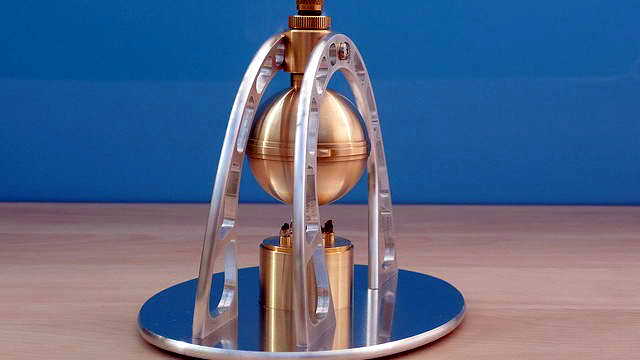 The most important subject in this part is the section devoted to the early 13th-century Muslim scholar al-Jazari (el-Cezeri in Turkish), who served in the palace of the Artuqid king in Diyarbakir (South-East Turkey) as a master engineer. He invented various automatic devices which he wrote about in his unique work, the famous and voluminous treatise that he wrote in Arabic under the title Kitab fi macrifat al-hiyal al-handasiyya (The Book of Knowledge of Ingenious Mechanical Devices). Dr Akman refers to the book under its Turkish title as Kitabu’l-Cami Beyn’el-Ilmi ve’l-Ameli en Nafi fi Sinaati’l-Hiyel. The treatise represents the high point of Islamic technology in the early 13th century, and survives in many manuscript copies, of which the illustrations in color, have technological as well as artistic value; these copies are preserved in many complete and incomplete copies in heritage libraries and museums around the world.

The book is now the centre of attention by historians of technology and was edited in a critical Arabic edition. It has been also translated into English and partially translated into German.

Some of al-Jazari’s machines have been brought to life and working models of them reconstructed. The drawings of his Automatic Device with the Elephant and the Bird, and the Automatic Device of Horses and Musicians are currently being displayed at the Metropolitan Museum in New York.

Al-Jazari also invented automatic devices to serve food and drinks to the sultans, who could not trust the hygiene of their servants’ hands. In addition to this, he invented an automatic ablution device to pour water for the sultans, since some were not comfortable with servants pouring water for them.

Figure 9: The Elephant Clock of al-Jazari as depicted in a leaf from The Book of Knowledge of Ingenious Mechanical Devices by al-Jazari (Source)

Even though particles such as electrons or photons or waves such as electro-magnetic waves were not known at his time, he established magnificent systems using the lifting power of water or the power of air pressure. Al-Jazari used “Superior Balance” system described by Professor Ross Ashby about 800 years later.

Professor Ashby defined the situation of superior level in human organs and matching balance and its control by superior communicational levels as “ultrastability”, and produced a simple 3-way systematic chart as he suggested that this can also be applied to machines, Hundreds of years before Ashby, al-Jazari had produced an example of superior balance with the automatic boat and the machine of automatic musicians. Dr Akman has devoted a large part of this chapter to the works of Al-Jazari, explaining with drawings how they worked, and lamenting the fact that he has not attracted enough attention in Turkey.

The section on al-Jazari is followed by a history of automatic robots and machines from the 13th century up to the 20th century. Starting with the automatic servant of German scholar Albertus Magnus, the talking head of Roger Bacon, the 14th century rooster, the machines of Leonardo Da Vinci, and the automatic toys of Gianello Della Torre from Cremona, many automatic devices were made and these works were the forerunners of electronic robots. 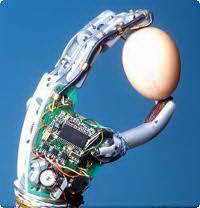 Figure 10: A more philosophical definition, suggested in 1956 by Louis Couffignal, one of the pioneers of cybernetics, characterizes cybernetics as “the art of ensuring the efficacy of action”. (Source)

Looking at the timeline until the 20th century, the progression from the mechanic toys to automatic systems is easily observable, but it can also be seen that there are no robots on the scene. The robot was first recognised in one of the plays by the Czech writer Karel Capek. Studies in this field gained momentum by the invention first of electricity and then electronics. The first examples of robots date from the beginning of that era; Eric in 1928, Alfa in 1932 and Elektra in 1939. Later on at the end of the 70’s, the first cybernetic robots were produced and while the early ones were used as demonstration models, the later ones were used productively.

In the “Various Cybernetics Studies and Applications in the 21st Century” section, the branches of science that derive from Cybernetics and their foundation has been described as well as the correlation between each of them.

Continuing the chapters, the fifth chapter called “The Cybernetics Dimension in the Internet and Globalisation” has been devoted to the Internet. The writer concludes the book with a short final essay in which he envisages the future of Cybernetics. Drawings from al-Jazari have been added on the final pages.

This book will be of benefit to those who want to learn about the historical aspects of Cybernetics as it not only covers the adventure of Cybernetics from the beginning until our own era but also looks into the future. Dr Akman speaks from the historical viewpoint but additionally adds some of his own memories -in particular he must have been discouraged by the lack of interest in al-Jazari in Turkey although he has devoted a great deal of time and effort to that study. 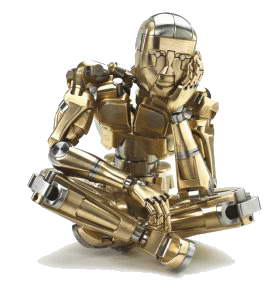 Figure 13: The innovative creation in science and technology has changed the perception to define the belief of our life (Source)

This book is one of the best sources on the history of Cybernetics; few people are working in this field and Toygar Akman has dedicated many years to the subject,. It has been written in very clear language and even those who have little prior knowledge of the subject can read it easily and gain a good understanding. 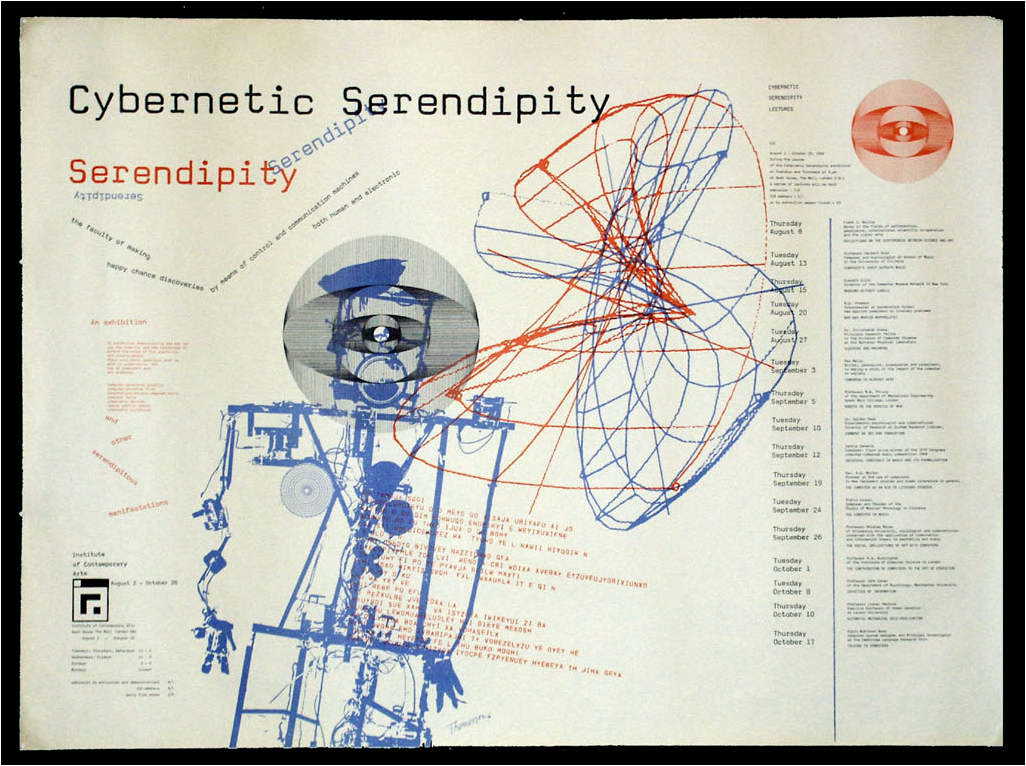 * Cem Nizamoglu, Webmaster of 1001 Inventions, FSTC and MuslimHeritage.com, the academic web portal maintained and published by the Foundation for Science, Technology and Civilisation (FSTC), UK, and member of the editorial board.