Popularly referred to as Razia Sultana, this is the story of Radiyya bint Iltutmish written by Tom Verde. Born in 1205, Budaun, Radiyya bint Iltutmish, also known as Raziya al-Din, was the first female ruler of the Sultanate in Delhi. Another name given to her was Jalâlat ud-Dîn Raziyâ in honour of her throne. She died at the young age of 35 on 13 October 1240. 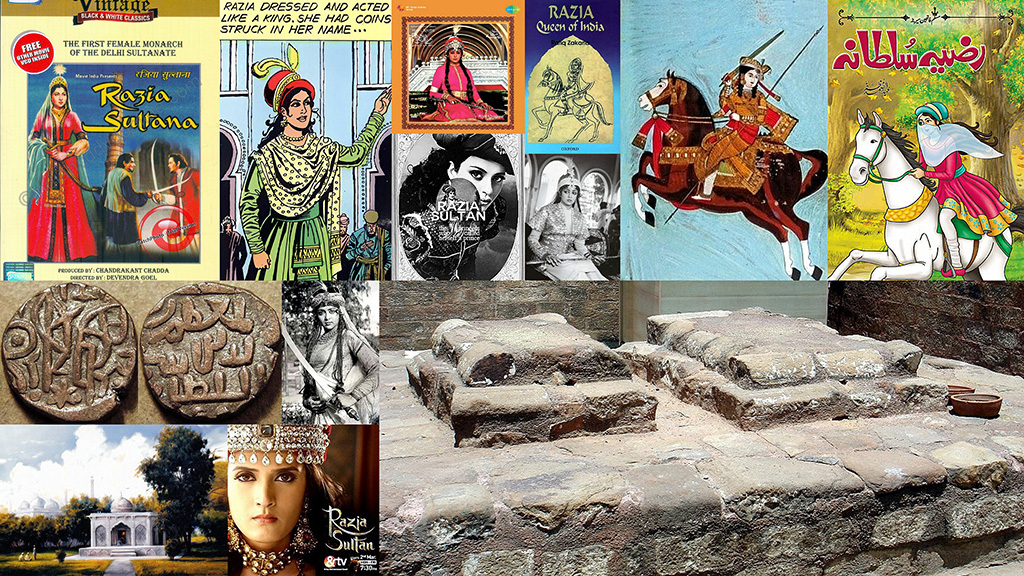 [Note of the Managing Editor] This article was originally published in AramcoWorld.com. We are grateful to Tom Verde for permitting republishing on the Muslim Heritage website. Some images added as indicated in their captions. Although as a policy, we do not publish articles delving in political or religious topics, this series on Women includes extensive content relating to the contribution of women to science, engineering, and management; a subject of importance and much interest.

Our second story takes us to the court of the Sultanate of Delhi. Its founder, Qutbu-ud-din Aibek, a Mamluk slave general from southern Kazakhstan, died from injuries sustained playing polo after only four years of rule. His son Aram Shah held the throne only for months before his own death at the hands of forces loyal to his brother-in-law, Shams-ud-din Iltutmish. The year was 1211.

As Sultan of Delhi over the next quarter century, Shams-ud-din Iltutmish proved extraordinarily able. Backed by the umara chihalgani (forty amirs), the elite corps of Turkic nobles, he extended the Sultanate’s realm from the Khyber Pass, along today’s Afghanistan-Pakistan border, east to the Bay of Bengal, on the opposite side of the subcontinent. He won a reputation for courage, wisdom and generosity while staving off not only usurpers but also the armies of no less a threat than Genghis Khan. The strength of his sultanate allowed for endowments to religious and scholarly institutions, the standardization of a currency and support for poets and philosophers. Near what was to be the end of his reign, in 1229, he received a title and robes of honor from the Abbasid caliph in Baghdad.

A century later, the Moroccan traveler Ibn Battuta noted Iltutmish was remembered for being “just, pious and of excellent character.” As an example, Ibn Battuta recorded Iltutmish’s decree that the seeking of justice be open to anyone who sought it, signaled by wearing a red-colored robe: 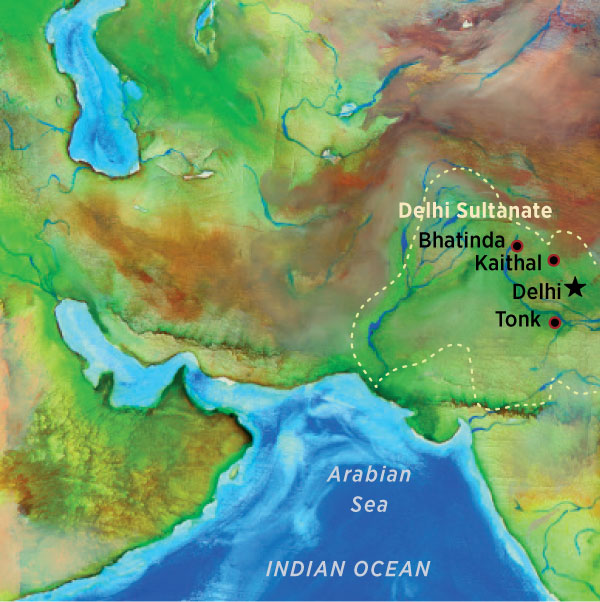 In short, upon his death in 1236, he had paved the way for his son Rukn-ud-din Firuz to inherit a stable, prosperous and highly cultured monarchy, if it hadn’t been for one thing: Firuz’s “inclinations were wholly towards buffoonery,” according to contemporary chronicler Minhaj al-Siraj Juzjani’s Tabaqat-i Nasiri. Firuz’s younger brother Bahram proved equally disappointing.

Aware of both his sons’ shortcomings, Iltutmish had a controversial backup plan in place: He designated the office of sultan to his eldest and most self-disciplined child: Radiyya, his daughter. The 16th-century Persian historian Firishta described her as imbued “of every good quality which usually adorns the ablest princes.” During her father’s reign, Firishta continued, “[she] employed herself frequently in the affairs of government; a disposition which he rather encouraged in her than otherwise, so that during the campaign in which he was engaged in the siege of Gualiar [modern Gwalior, a rival city south of Delhi], he appointed her regent during his absence.”

When the umara chihalgani questioned his appointment, Firishta recorded Iltutmish’s attempt to reason with them: “[My] sons give themselves up to wine and every other excess and none of them possesses the capability of managing the affairs of the country.” He added that Radiyya “was better than twenty such sons.”

Iltutmish designated the office of sultan to his eldest and most self-disciplined child: Radiyya.

None of this stopped Firuz from shoving his step-sister aside and seizing the throne for himself upon his father’s death in 1236. Or, more precisely, he had his mother, Shah Terken, do it for him. The harem’s chief concubine, Shah Terken was, according to Firishta,“a monster of cruelty”. Even before Iltutmish’s death, she had taken advantage of the umara chihalgani’s misgivings about Radiyya as a female ruler and bribed them to support Firuz.

After Iltutmish died, she set her sights quickly and directly on 31-year-old Radiyya. She arranged for a deep pit to be dug along the path where the princess frequently went horseback riding. However, the plot was discovered, and Radiyya was spared.

“The minds of the people revolted at these scenes,” wrote Firishta, and they began to rally around Radiyya. The amirs imprisoned Terken, and although they acted to advance Radiyya to the throne, Firuz retaliated militarily. This brought on the stirring gesture for which Radiyya is most remembered: Recalling her father Iltutmish’s decree, on the eve of the battle, Radiyya appeared wearing not royal attire, but the red-colored robe of one who seeks a redress of grievance. She appealed directly to the people and the army, and thus defeated Firuz, who was captured and put to death—in all likelihood together with his mother—in November 1236.

Under Radiyya, “all things returned to their usual rules and customs,” Juzjani reported. “Sultan Radiyya was a great monarch,” he observed, employing the masculine form of her title. “She was wise, just and generous, a benefactor to her kingdom, a dispenser of justice, the protector of her subjects, and the leader of her armies … endowed with all the qualities befitting a king,” he recorded.

Still, the chronicler felt compelled to editorialize: “[B]ut she was not born of the right sex, and so in the estimation of men, all these virtues were worthless.”

This, in fact, was what the power-hungry umara chihalgani was hoping for: a “worthless,” subservient woman they could manipulate from behind the scenes. But Radiyya, it seems, was neither so easily fooled nor foiled. Appearing unveiled in public during the traditional royal procession, she used her first official act as sultan to set the tone for her reign as one of self-assertion and even defiance.

Other historic accounts say she cut her hair short and, wearing men’s robes, sat among the people in the marketplace to listen to their grievances and render judgments.

Not only did she rule astutely, but also, as historian Peter Jackson noted, she was the only sultan of her time whom Juzjani described as a military commander. Like her father, she took diplomatic steps to keep the Mongols in check, but she also put down insurgencies: She crushed a rebellion by one of the old guard who objected to her on the grounds of her sex, and she campaigned against other rival incursions. Surviving coins minted in her name were imprinted with “commander of the faithful” and “most mighty sultan.” To win the people’s support on the eve of battle, Radiyya appeared wearing the red robe of one who seeks justice.

While all this may have irked the umara chihalgani, its members didn’t feel compelled to do much about it until Radiyya started threatening their job security by appointing an Ethiopian slave, Jamal ud-din Yaqut, to the post of Lord of the Stables (Amir-i akhur, or amir of horses, i.e., Sultan’s equerry). The job commanded great prestige because it put him in daily, ear-whispering distance of the sultan. Peppering the court with spies, the nobles began digging for dirt. Lacking anything concrete, they fell back on one of the oldest political tricks in the smear-campaign handbook.

“A very great degree of familiarity was observed to exist between [Yaqut] and the Queen,” wrote Firishta. Whether or not Radiyya shared more than just a master-subject relationship with Yaqut will never be truly known. What ultimately mattered, according to Jackson, “was that Radiyya sought to develop a power-base of her own and neglected the Turkish slave elite which she and Firuz had inherited from their father. Her dependence on Yaqut and his promotion to the rank of intendant of the imperial stables must be seen in this context.”

To extinguish the threat, the amirs began openly to challenge the sultan. But Radiyya was beloved by the citizens, especially in Delhi, and the amirs knew that overthrowing her on her home turf would prove difficult. In the spring of 1240, they convinced one of their fellow amirs, the provincial governor of Bhatinda, Malik (King) Altunapa, to conjure up a rebellion in the Punjab as bait to lure Radiyya away from Delhi.

While she was away, the umara chihalgani had Yaqut murdered, and then they dusted off her hapless half-brother Bahram and set him on the throne.

Worse yet for Radiyya, the Bhatinda campaign proved a rout. She was captured, and Altunapa imprisoned her. Then, in a truth-is-stranger-than-fiction twist of fate, she and Altunapa, whether from love or ambition or both, married, and he pledged to reinstate her as sultan.

The newlyweds marched upon Delhi, hoping for triumph, but their army was no match for the forces the amirs rallied around Bahram. Deserted by their troops after a humiliating retreat, Radiyya and Altunapa, according to Juzjani, were captured and executed by Hindus near the Punjab city of Kaithal on December 25, 1240. She was 35 years old.

Ibn Battuta, however, recorded a more embellished account of her death: Defeated, Radiyya stumbled into a farmer’s field, hungry and exhausted, begging for food. The farmer gave her a crust of bread, and she fell asleep beneath a tree. Catching sight of jewels glinting in the embroidery of her garments, the farmer killed her and buried her, and “taking some of her garments, he went to the market to sell them.” The plan backfired when local authorities suspected the farmer of theft, beat a confession out of him and recovered Radiyya’s body. (To this day, the actual location of Radiyya’s grave remains uncertain: Delhi, Kaithal and Tonk, in Rajasthan state, all claim the honor.) 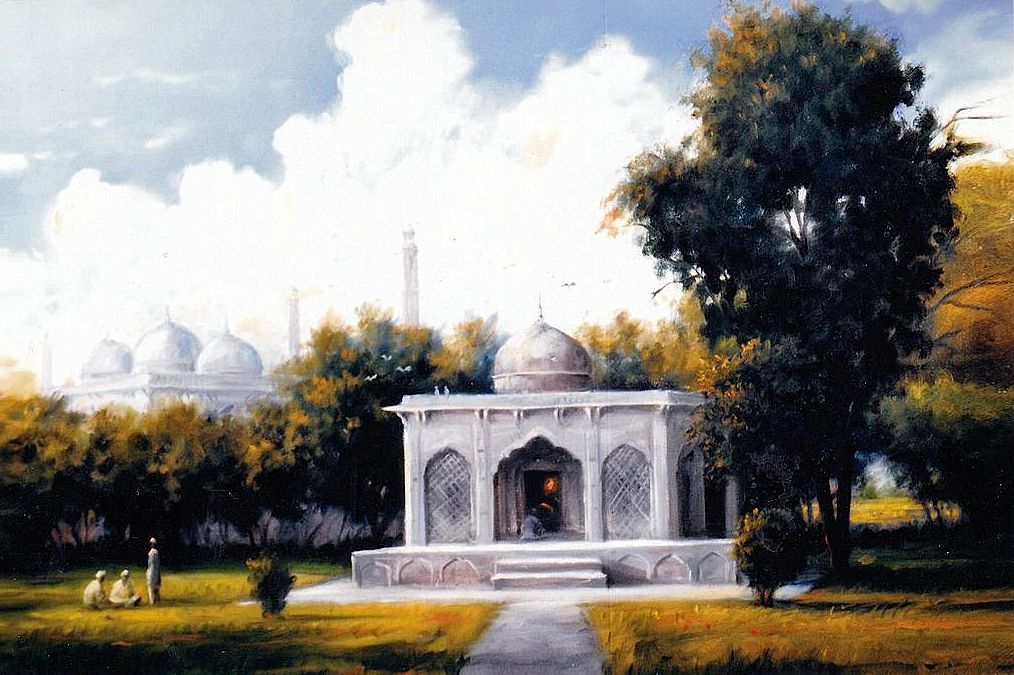 Not unexpectedly, Radiyya’s half-brother Bahram was deposed for incompetence after two years on the throne. The sultanate itself endured two more centuries until it fell to the Turco-Mongol conqueror Timur.

Of all the sultans of Delhi, Radiyya is perhaps the best remembered in popular culture, even eight centuries later. The subject of poems, plays, novels, Bollywood films of highly varying quality and, last year, an epic mini-series on Indian television, she continues to capture the social imagination of India and the world. 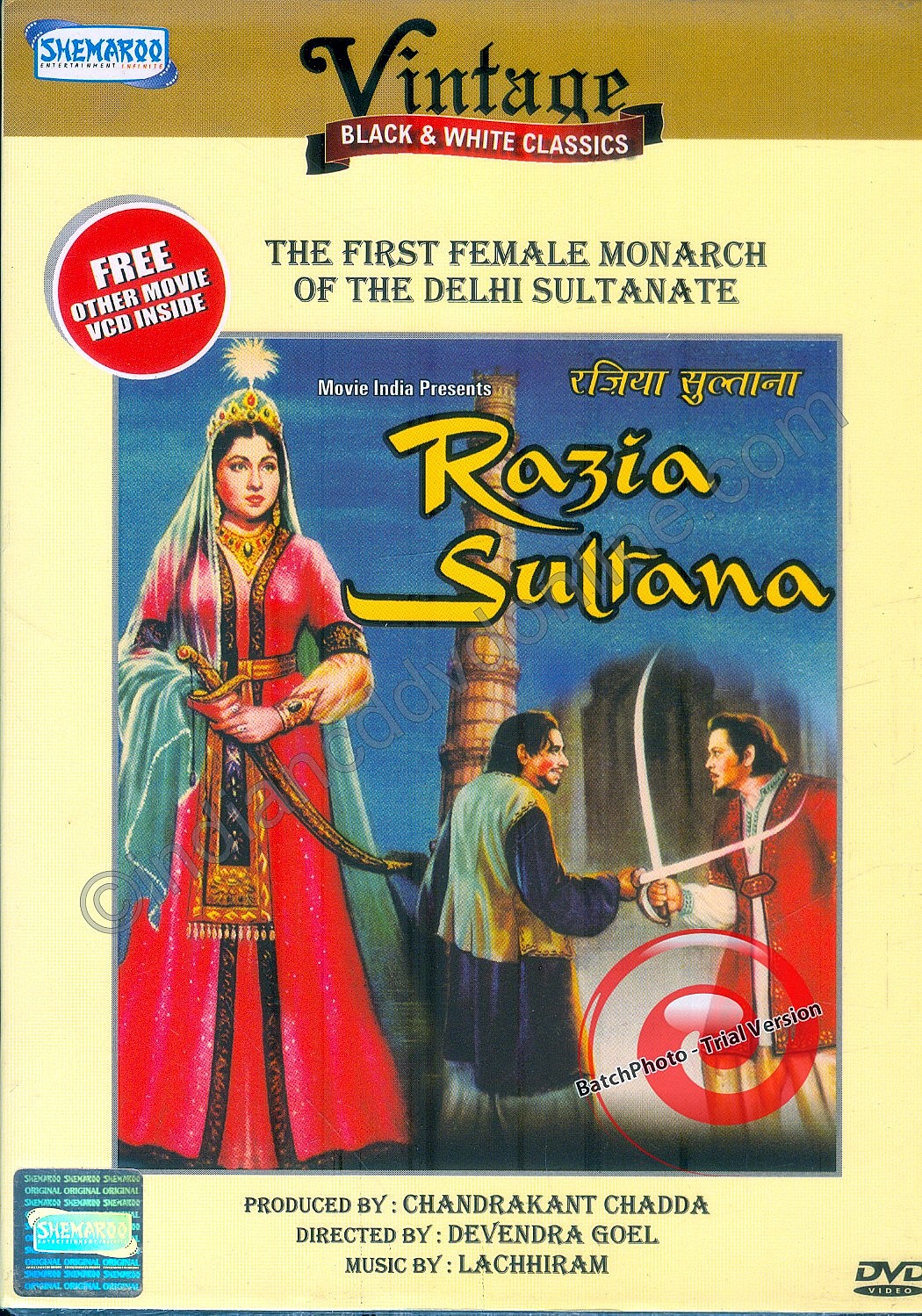 [4] Edward Thomas, The Chronicles of the Pathán Kings of Dehli. Delhi: Trübner & Company, 1871.

[16] Sir Henry Miers Elliot, The History of India, as Told by Its Own Historians: The Muhammadan Period. London: Trubner and Co, 1871

[18] Williams Jackson, History of India: The Mohammedan Period as Described by its Own Historians. London: The Grolier Society, 1906-1907, vol. 2