Mr. Hadi Ali Shateh discusses design solutions adopted in regions of desert climate and analyses the arrangements made in the interior architecture of houses of Gadames city, Libya. 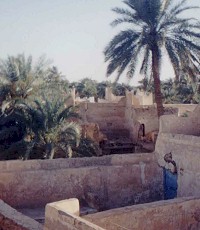 Below is a short abstract from a lengthy well written paper on the design solutions adopted in regions of desert climate. The central thrust is to analyse the arrangements made in interior architecture of houses of Gadames city, Libya.

For consultation of the full article, please refer to the PDF file found in the Resources below.

The desert environment is often regarded as a primitive waste land occasionally occupied by tents of the passing nomads. Yet, the Arab desert saw the birth and establishment of one of the great civilisations the world has ever seen. The Islamic civilisation, with its huge achievements, started in desert Arabia, the vestige of which is still scattered in various regions in the form of a number of thriving cities and ruins of others. With their distinctive character, these cities display a sophisticated design and building technology. They were specifically developed to meet the harsh climatic conditions of this type of environment and to translate the socio-cultural structures of the desert societies.

One of these cities is Gademes, a Libyan desert city with a typical desert climate consisting mainly of hot and dry season and temperatures reaching an average of 48ÂºC. Gadames developed a design system, which largely conform to the surrounding environmental conditions. Such measures can be clearly seen in the character of its houses and the way their internal space is organised and used.

The houses are well equipped to cope with the severe climate conditions. They generally open to vaulted streets to protect against the burning heat of the sun (figure 1). The walls, from mud, were made thick to absorb the heat (figure 2). Internally this thickness provides room for wall cupboards storing shoes, clothes and other items. The entrance usually connects with a long hall leading to the main staircase of the upper floor. It is usually painted white and equipped with a number of mirrors to reflect light and keep the area bright.

The living space consists of the main living room located at the centre of the house. It is subdivided into two sections; one for household use and another for the use of guests and visitors. Around this central space, the rest of rooms are arranged according to their use. They include the boys room, the girls room and the storage room. Although these rooms are a level higher then the living room, they overlook it and are accessed from it through a set of staircase. Such arrangements keep children always in sight and allow the head of the household (usually the mother or eldest sister) to control the space effectively.

The kitchen and a room for the storage of fuel were erected on the roof to discharge the extra heat and smoke caused by cooking and to protect against accidental fire. In the event of fire, residents can be led out safely and the fire may be easily contained if starts from the open roof terrace. Furthermore, by adding this floor, the insulation of the living floors below from the cold nights of the desert is achieved.

In terms of ventilation and lighting, Gadames provides a unique design scheme addressing this issue. In addition to the reduction of spaces, which open directly to the sky, the street system was designed in a manner to avoid direct contact with the sun rays. This was achieved by inclining the vertical street line at an angle forcing an angular entry of the rays, which weakens their brightness and reduces the heat in the street (figure 3).

In houses, windows are absent and light enters in through a small aperture (louver), which does not exceed the 1mÂ², opened in the roof of the central living space and through the two floors. As this is the only source of light for the whole house, residents decorated their internal walls with reflective elements such as the white colour and mirrors, which are placed in the right locations to receive the sun coming from the aperture and project to other places. This method indeed provided good lighting without risking more heat.

Housing units of the city adopted this typical layout and subsequently appear as if they have one common scale and one common plan. They even display the same type of hand made furniture and decor, which gave the city a strong identity feature.