Amongst the mechanical devices described by the Banu Musa Brothers in their book of mechanics Kitab al-hiyal, seven models present a variety of sophisticated fountains. This article analyses the geometric and physical principles lying behind these mechanical devices, with the help of basic line drawings and 3D computer generated representation. 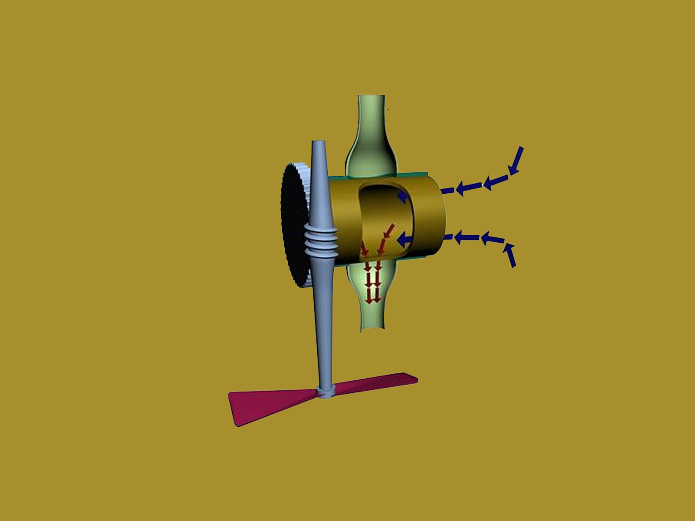 In their famous book of mechanics Kitāb al-hiyal (Book of mechanical devices), the Banū Mūsā Brothers (Baghdad, middle of the 9th century CE) had documented their designs for fountains (amongst many other devices and tricks involving water). This short article is devoted to analyse the geometric and physical principles of the models they designed for fountains. In this category, the book contains seven models or designs in total. The first design introduces the three basic styles found in all the fountains of Kitāb al-hiyal, whilst the other six designs discuss how the basic fountains can be used together to form more intricate fountains. For example, how the fountain can periodically change from one water shape to another [1].

Each fountain has what we may call a bud, and it’s this bud that houses the pipes which give the fountain its unique water shapes. Typically the bud inside is in two compartments. The bottom is where water and pressure accumulates, before they are released through pipes in the upper compartment. Depending on how the upper compartment is arranged, it will determine the shape of the water exiting through the top. There are three basic shapes: lily, shield and spear. These styles are shown in Figure 1 as basic line drawings and as a 3D computer generated representation.

A large vessel of water is placed high above and out of sight of the fountain. The vessel provides each fountain with water at a sufficient pressure to obtain the desired water shape.

The basic fountains form part of many other grander designs that incorporate two shapes into one bud or uses two fountains together that also alternate between water shapes; for example, fountains that periodically change from a spear to a shield and back again.

Various designs have been documented by the Banū Mūsā Brothers, but all achieve similar results. However, in each case the method of achievement varies. Each design is based on a specific method of having fountains that are able to periodically change the shape of the water that comes from each bud.

3.1. A fountain that alternates water shapes by use of a balance

The design uses a bud that is capable of producing a water spear and shield, but not in one instance. Using an arrangement of two vessels, pipes and a balance (placed away from the fountains/buds), it allows the fountain to periodically alternate between water shapes (Fig. 2). The balance acts as a switch determining how water from a main reservoir or canal is distributed into each vessel. One of the vessels supply water for the spear, and the other is for the shield. These vessels are placed high above the fountain and out of public sight; they act as pressure accumulators and thus provide a sufficient supply of water and pressure to create the desired fountain effects.

A variation of the use of this balance system is to have two buds working simultaneously, where one bud emits a spear, while the other forms a shield, and they periodically change over. It is a similar configuration as described above, but the two vessels are now identical to provide for two buds.

3.2. A fountain that alternates water shapes by use of a wind/water turbine

Using one bud, it periodically changes its water shape from a lily to a spear, but instead of using a balance for timing, it uses a turbine that is either turned by flowing water or wind (Fig. 3). Water flows from a main reservoir over the turbine that is fixed on to a vertical rotating shaft. Water turning the turbine is collected in a vessel that is also attached to the shaft and rotates with the turbine. This rotating vessel has a single hole at its bottom and depending on where the position of the hole, water will collect in the vessels that supply the bud with water (red to spear, green to shield). The vessel that gives the bud its varying supply of water for each water shape is similar to that seen in the above fountain with a balance.

Attached to the same shaft and above the water turbine are wind vanes, which can catch the wind and turn with it. Use of wind vanes add a bit of randomness to the system, as the wind is less predictable than using the flow of water.

3.3. A fountain that alternates water shapes by use of a water turbine and a worm gear

The previous two designs have vessels that determine the water shape high above and hidden away from the fountains, but by using worm gears and a clever valve it is possible to have everything housed inside the bud to achieve similar effects (Fig. 4). Water still enters the bottom of the bud at high pressure as with all the other designs, but the effect of alternate water shapes is achieved by only hiding one large vessel as with the basic designs.

The valve used in this design is as described and translated as a ‘Navel’ Valve. It is so called because the valve is hollow inside, as is the navel of the human abdomen. The valve is capable of directing water two ways, which is sufficient to channel the flow to give either the spear shape or the shield shape. The valve body is a hollow cylinder, capped on one end, and it also has a similar inner concentric cylinder that is able to rotate freely but is of a close fit to the valve body. The inner cylinder can be rotated because there is a gear extending from it and is fixed outside the outer cylinder on its capped end. It is a worm wheel turned slowly with its worm rotating with the water turbine on the same shaft. The valve is constantly rotating with the worm wheel, and thus gives the fountain its periodic change in water shapes.

There are two other variations of fountains with this method as with the balance method. The variations use two buds that mutually alternate between water shapes.

Through manuscripts and history, the Muslims appear to be the first to use water features in their designs for gardens, but there seems to be little mention of fountains. The Banū Mūsā brothers do not write much on how any of their devices are to be used and are not described with a specific purpose in mind. Their manual demonstrates their skills with machinery, as designers and craftsmen. With the fountains and designs with the worm gear, it shows their competence as designers to incorporate such technology, and as craftsmen for their understanding of fabrication techniques to manufacture navel valves and worm gears. Like many other fine technology of the time, the fountains would give a sense of mysticism and amazement through its splendour and variety in shields changing to spears and vice versa.

[1] The English translation of Banu Musa’s book was performed by Donald R. Hill: see Banū Mūsā 1979. The Book of Ingenious Devices (Kitāb al-Hiyal) by the Banū (sons of) Mūsā ibn Shākir. Translated and annotated by Donald R. Hill. Dordrecht etc.: D. Reidel, 1979. In this translation, the seven fountains are numbered as models 88-94 on pp. 218-231.

Thanks are due to Mr. Jonathan Chang for his assistance in this work. All figures, graphics and associated media are copyrighted to Jonathon Chang for the FSTC.

*Foundation for Science, Technology and Civilisation, Chairman of the board; Emeritus Professor at the University of Manchester, UK.