Abu Ja`far Muhammad ibn Mûsâ al-Khwârazmî is a truly outstanding personality and a foremost representative of the supremacy of the Islamic World during the Middle Ages. Medieval Islam was largely responsible for the shaping of the canon of knowledge that dominated medieval European thought. 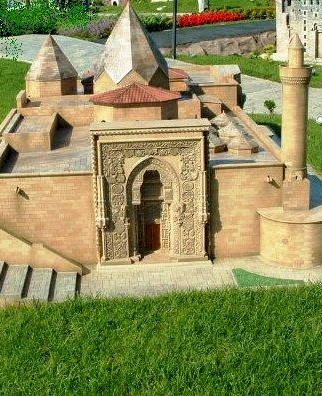 This short article is taken from the full article (by Prof. Aydin Sayili) which is available here as a 68 page PDF file

Abu Ja`far Muhammad ibn Mûsâ al-Khwârazmî is a truly outstanding personality and a leading representative of the supremacy of the Islamic World during the Middle Ages in scientific and intellectual pursuits. Medieval Islam was largely responsible for the shaping of the canon of knowledge that dominated medieval European thought. This was the result of a noteworthy process of multidimensional and complex transmission of scientific knowledge enriched at most stages by new contributions and creative activity. Al-Khwârazmî is a symbol of this historical process and a key figure at its early and formative stages which were realized in Islam as well as in its later phases in which the passage of systematic influence from Islam to Western Europe was involved.

Indeed, Al-Khwârazmî’s fame and sphere of influence went beyond the boundaries of the World of Islam itself and extended into Western Europe upon the advent of the “Twelfth Century Renaissance”. Though his activity clearly ranged over much wider spheres, his main title to fame rested upon his achievements in the fields of arithmetic and algebra, in both of which he had the reputation of being a trailblazer and an innovator. The European word algebra was derived from the name of his book entitled “An Abridged Treatise on the Jabr and Muqâbala (Type of) Calculation”, while the method of calculation with the so called Hindu-Arabic numerals, or number system, was called algorism or algorithm and its several other variants, derived from the name of Al-Khwârazmî, in Western Europe, in the late Middle Ages, and this was the origin of the modern word algorithm, signifying the art of computing in a specific or particular manner or way.

Al-Khwarizmi’s years of greatest productivity coincided with the reigns of the seventh Abbasid caliph Al-Ma’mun (813-833 CE) and his two successors Al-Mu’tasim and Al-Wathiq (842-847). He worked in the Bayt al-Hikma, or the House of Wisdom, which was founded by Al-Ma’mun’s father Harun al-Rashid and the Barmarks, but developed especially during Al-Ma-mun’s reign. This was a kind of academy and centre of systematic translation of scientific, philosophical, and medical works especially from Greek and Syriac into Arabic, and Al-Khwarizmi was associated with it. He was apparently at the head of this institution, as it may be gathered from certain statements of Ibn al-Nadim and Ibn al-Qifti.

Al-Khwarizmi is also known to have been the author of a zij, i.e. a book containing astronomical tables and material of an auxiliary nature. Only a version of Al-Khwarizmi’s zij, as revised by Maslama al-Majriti (fl.ca. 1000) has come down to us. This book of Al-Khwarizmi contains sine and tangent tables, but Maslama may have added the latter function.

Sarton says, “… the history of science is not simply the history of great scientists. When one investigates carefully the genesis of any, one finds that it was gradually prepared by a number of smaller ones, and the deeper one’s investigation, the more intermediary stages are found. …” These words are rather sharply reminiscent of the results of scholarly research on Al-Khwârazmî as an innovator in the field of algebra and a trailblazer in his activity of transmitting and spreading the method of calculation with the Hindu-Arabic numerals. But Sarton’s words quoted above should at the same time serve to make us feel sure that such elaborations and developments of our knowledge of the history of various subjects should be looked upon as entirely in keeping with the nature of things. Consequently, any observation of this kind in connection with Al-Khwârazmî’s work should not detract in any way from the greatness of Al-Khwârazmî as an outstanding scientist and teacher of worldwide scope.