The genesis of this article lies in a recent visit to the Romanesque cathedral of Lund. While in the cathedral, I walked over to the medieval astronomical clock to await the moving figures and music that accompany the striking of the hour. During my wait, I noticed four carved figures that had been placed in each of the corners of the top part of the clock. The figures were wearing exotic clothing and one even wore a turban, immediately bringing to mind the image of an Arabic astronomer. This challenged my previous assumption that Muslims had generally been portrayed in a negative light in medieval Scandinavia. Indeed, it actually seemed to suggest that there was a sense of pride in having these figures here occupying a prominent place within the walls of one of medieval Scandinavia’s most important ecclesiastical buildings. This encounter tied in with research that I had been undertaking on the influence and dissemination of Arabic scientific works in Scandinavia, particularly in Iceland. 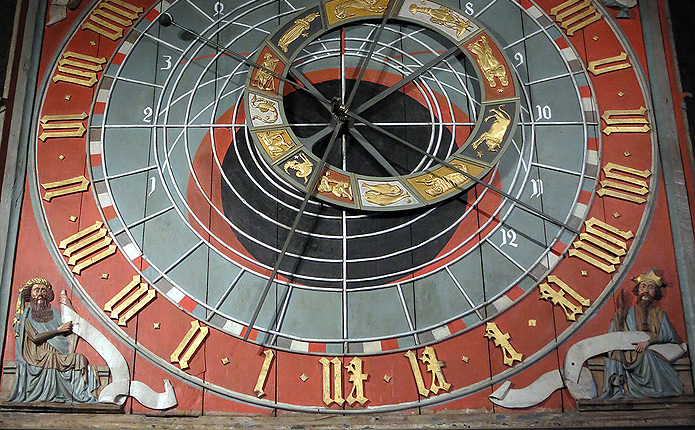 Note of the Editor

This article is taken from “The Evidence for Islamic Scientific Works in Medieval Iceland” by kind permission of the author Christian Etheridge and the publishers De Gruyter.

The first Lund cathedral, dedicated to the martyr St. Lawrence, traces its beginnings to the reign of the Danish King Sven II Estridsson (1047–1074). In 1104, Lund was made the archbishopric of all Scandinavia, and the present cathedral was built shortly afterwards. Although the Scandinavian archbishopric was split up by the Papal Legate Nicholas Breakspear (later Pope Adrian IV 1154-1159) in 1152, Lund retained its position as one of the most important ecclesiastical centres in medieval Scandinavia. The astronomical clock was constructed c. 1422,[1] but after the Middle Ages it gradually fell into disuse and by the nineteenth century had ended up in a storeroom, where it was found and rebuilt again in 1923 by the cathedral architect Theodore Wahlin and the clockmaker Bertram Larsen. Only the top half of the clock is original, and this is where the four exotically attired figures are located.[2] 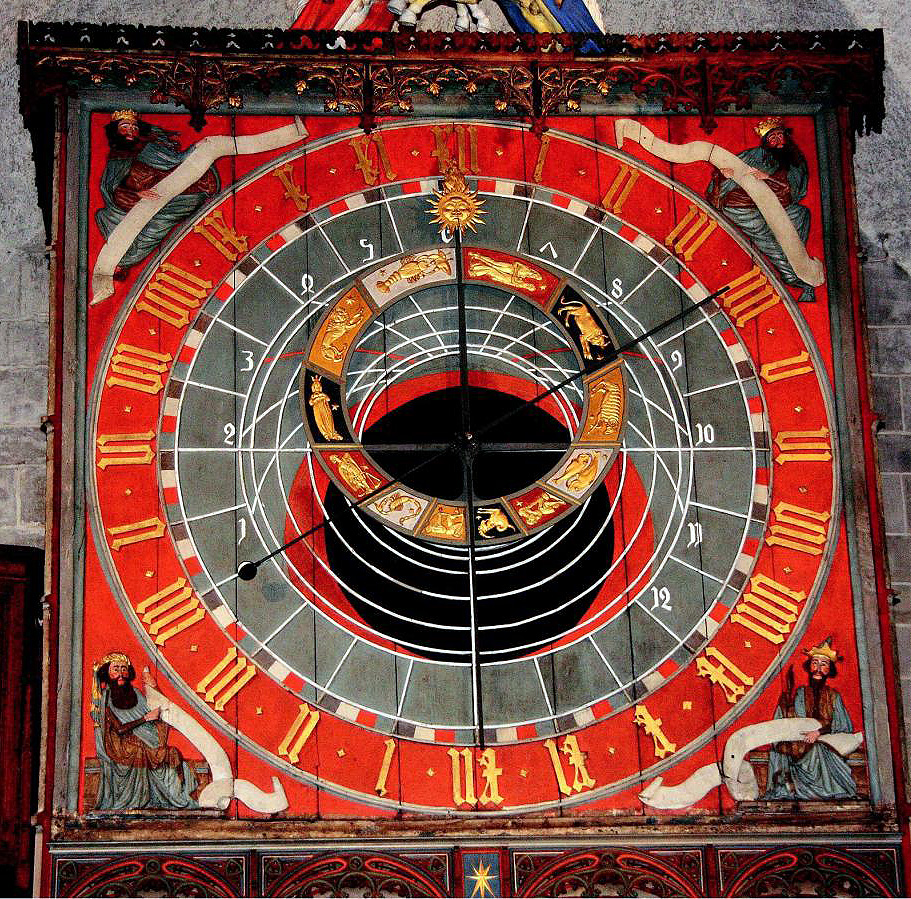 Each of the figures holds a paper scroll on which the original writing has been obliterated by the passage of time. The two upper figures wear crowns of a typical medieval type. The lower right-hand figure also has a crown, but of oriental type, whereas the other figure wears a turban which seems to denote a Muslim.[3]

Wahlin, in his work on the reconstruction of the clock, interpreted the two upper figures as representing great astronomers from Antiquity, such as Hipparchus, Ptolemy, Aristotle, or maybe even King Alfonso X (1221–1284). Wahlin also hypothesized that the lower right-hand figure was the Chinese astronomer Tcheou-Kong, who lived c. 1100 BCE, and that the other figure with the turban was either the Persian astrologer Albumasar (Abu Ma’shar al-Bal-khi, 787–886) or the Arabic astronomer Ali-Ben Isa (Ali ibn ‘Isa al-Asṭurlabi, ninth century).[4] Anders Andren, in his work on medieval Lund, also noted that the two upper figures appeared to be Europeans and possibly represented Aristotle and Ptolemy. Andren concluded that there was no documented evidence to help to determine the identity of the four figures.[5] There is, however, firm comparative evidence that gives a much clearer picture as to the identity of the four astronomers and the possible maker of the clock.

The similarities in design, as well as the geographical (there are fewer than two hundred kilometres between the clocks) and chronological proximity of the Stralsund and Bad Doberan clocks would indeed make Nikolaus the most likely candidate for clockmaker of Lund.[8] If this is the case, then the attributions of the four astronomers would be the same in Lund as the other clocks in Stralsund and Bad Doberan, and it is at the identities of these figures that we must next look.

Claudius Ptolemy (second century CE) was an Alexandrian astronomer who wrote widely on astronomy, geography, and astrology. His most important work was the Almagest, a detailed star catalogue and astronomical work that was lost to the Latin West sometime in the sixth century. It was translated and commented on extensively in the Islamic world in the ninth century and be-came known as the al-Majisti, or great work, later Latinized to Almagest. The court of Alfonso X, king of Castile, produced several works of astronomy and astrology, of which the most important was the Tabulae alphonsinae, or Alfon-sine tables. Haly Abenragel (Abu l-Hasan ʿAli ibn Abi l-Rijal, died after 1037) was a court astrologer for the Zirid dynasty based in Kairouan.[9] His influential work Kitab al-bari’ fi akham an-nujum (Book on the Judgement of the Stars) was translated into Latin at the court of Alfonso X in 1254. Albumasar was an influential astrologer and astronomer in the Abbasid court in Baghdad. His works on the philosophical reasoning behind astrology influenced Adelard of Bath, Albertus Magnus, and Roger Bacon amongst others in the West.

The figures on the Lund astronomical clock suggest an admiration for astronomers on the part of the clockmaker or his patron.[10] It also implies a receptive audience that would likewise appreciate these figures and recognize in them a sense of wisdom and knowledge. The fact that two Islamic astronomers are also represented there is proof that in early fifteenth-century Scandinavia Islamic scholars were so admired that they could be represented on the walls of one of its greatest cathedrals. This is, of course, party to the classic dichotomy of Christian thinking towards Islam and Muslims in the Middle Ages. On the one hand, Islam was seen as heresy and Muslims as either being in error or evil. Peter the Venerable (1092–1156), in his influential Liber contra sectamsive haeresim Saracenorum (The Book against the Sect or Heresy of the Sara-cens), denoted that Islam was either a secta (body of belief independent of Christianity) or haeresis (heresy). To quote Jeffrey Cohen in his On SaracenEnjoyment:

“He [Peter the Venerable] knew that all Saracens shared its errors (hence the unnuanced collective plural Saracenorum), and tautologically that sharing rendered them Saracens. Cultural specificities were lost as the inhabitants of Iberia and the East were unified be-neath the sign Saracen, a racialized figure of ultimate difference who condensed everything inimical to the fragile Christian selfsame.”[11]

Works such as those of Peter the Venerable were complemented by negative manuscript images of Muslims, the most famous of these being the unhorsing of Saladin in the Luttrell Psalter (British Library, Add. MS 42130 fol. 82) dating from 1325–1340.[12] In this scene Saladin has his helmet knocked off by a jousting Richard the Lionheart and is exposed to have the face of a grotesque blue demon underneath. These negative images and works stood in contrast to the knowledge that Islamic science and philosophy were far in advance of that in the Latin West, which eventually gave way to a more positive view of Muslim scholars. For example Hugh of Santalla, the twelfth-century Spanish translator, explained to his fellow Latin Christian scholars that Islamic astronomers were to be looked up to, because “It befits us to imitate the Arabs especially, for they as it were are our teachers and precursors in this art”.[13] The Cordovan philosopher Averroes (‘Abul-Walid Muḥammad bin ‘Aḥmad bin Rusd, 1126– 1198) was known by the title of “The Commentator” in the Latin West, because his commentaries on Aristotle were the most important and influential Aristotelian critiques during the Middle Ages. To investigate further this positive image of the Islamic scholar in an Icelandic context, it is fundamental to first study the impact of Islamic scientific works on medieval Icelandic scholarship.

Lund Cathedral after the restauration by Helgo Zettervall in 1860-1880. View from northeast. The Romanesque cathedral, one of the oldest churches in Scandinavia, was inaugurated in 1145 (Source)

The article, The Evidence for Islamic Scientific Works in Medieval Iceland, is a critical analysis of Islamic scientific works represented in the medieval Icelandic manuscript corpus, and their reception in Iceland. The article also attempts to show positive representations of Islamic scholars of science in Icelandic literature. The article uses the images of Islamic scientists on the Lund astronomical clock as a surprising example of positive representation in Scandinavia, and a way to introduce the topic. From there the paper addresses the major appearances of Islamic scientific works in medieval Iceland including a fragmentary treatise on the astrolabe, a description of the use of a sine quadrant, an Old Icelandic version of Algorismus and the appearance of Islamic scholars and Arabic scientific terms. The paper makes an examination of possible routes of transmission of this knowledge to Iceland. Finally the article looks into the positive literary figure of Master Pérús, a wise and respected Arabian scholar that appears in Icelandic sagas and exemplars of the 14th century.

For a list of the references see the Bibliography at the end of the original chapter “The Evidence for Islamic Scientific Works in Medieval Iceland” by Christian Etheridge. 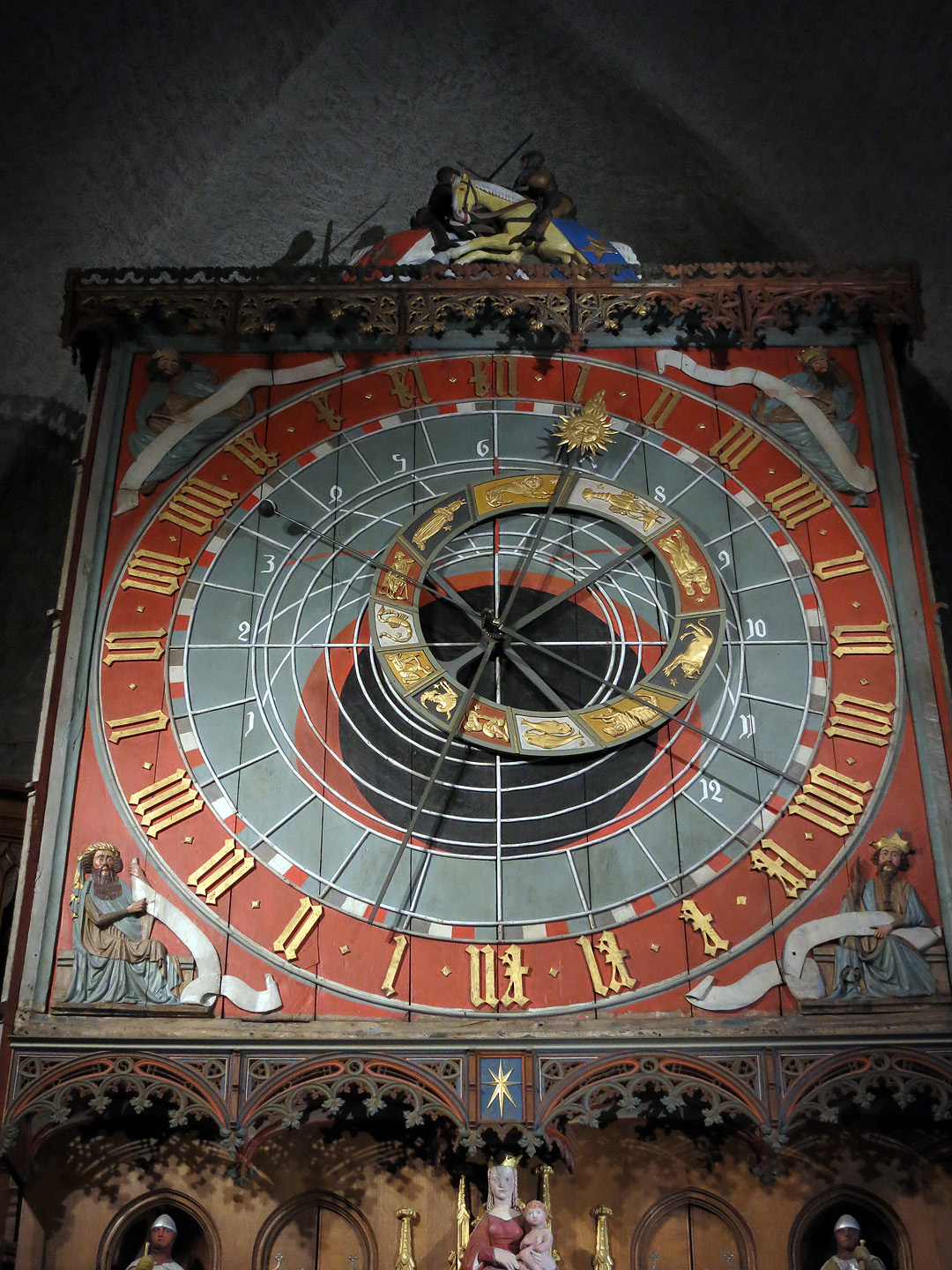 [8] Kragh 2005, 52–53 has the creator of the clock as an astronomer called Petrus de Vadstena.This is an error resulting from a confusion of Petrus Astronomus (d. 1513), a monk from Vadstena monastery who built an astronomical clock in Uppsala Cathedral in 1506, with Petrus Olavi (1307–1390), who wrote the Vita beatae Birgittae at Vadstena monastery.

[12] See fig. 2 in the article by Yvonne Friedman in this volume.