During the spring of 2007, Kaleem Hussain hosted a radio show titled the Muslim Heritage Radio Show at Unity FM Radio in Birmingham. The radio show coincided with the 1001 Inventions Exhibition that took place in Birmingham. As a part of the Muslim Heritage Radio Show, a set of interviews were recorded and broadcasted. The interviewed were scholars working in various fields of the Islamic science, from university scholars and first class academics, to artists and entrepreneurs. We transcribed this unique collection of interviews and are glad to present them to our readers to gain more knowledge on the large spectrum of concerns related to Islam and Muslims, from the rich legacy of the classical Islamic civilisation to modern day perspectives about Muslim heritage in our world. 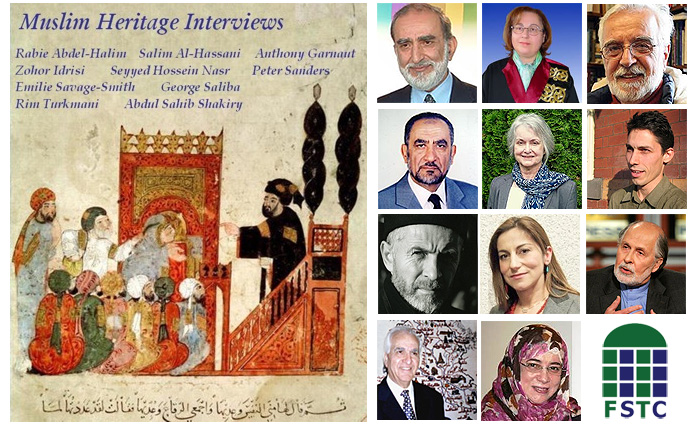 During the spring of 2007, Kaleem Hussain hosted a radio show titled the Muslim Heritage Radio Show at Unity FM Radio in Birmingham. The radio show hosted by Kaleem coincided with the 1001 Inventions Exhibition (www.1001inventions.com) that took place at the Think Tank in Birmingham. As a part of the Muslim Heritage Radio Show, a set of interviews was broadcasted. All the interviewed personalities have a common and deep interest in Muslim heritage, Islamic civilisation, and most of them are engaged in various campaigns aiming at presenting Islamic history, civilisation and legacy to the modern world. Due to impending demands from various quarters, the editorial board of www.MuslimHeritage.com decided that the interviews should be transcribed in a written format so that those that had missed out on listening to the interviews could have an opportunity to benefit from the knowledge and wisdom that the experts put forward on the theme of Muslim Heritage. Finally, the interview with Rabie Abdel-Halim was performed in May 2009 through written questions to which he kindly wrote his replies.

Melody Millow assisted in some of the transcribing of the interviews. Afterwards they were revised by the interviewed personalities, they were edited by Kaleem Hussain and Mohammed Abattouy. The editors benefited greatly from comments and amendments coming from the editorial board of www.MuslimHeritage.com. The interviews are the first outcome of the series ” Muslim Heritage Interviews” that the Foundation for Science Technology & Civilization (FSTC) decided to publish in various formats: audio, text and video.

Each interview is accompanied with a short biography and a photo. We thank the scholars and individuals who shared with us these interviews and gave us their time for the benefit of our readers.

In the first of the Muslim Heritage Interview Series, Professor Salim T. S. Al-Hassani, the Chairman of the Board of the Foundation for Science, Technology and Civilisation (FSTC), talks of the beginning of his interest in Muslim Heritage,after a brilliant career as a Professor of mechanical engineering at the University of Manchester. He details the context of the foundation of FSTC, the launch of its project, the outreach and meaning of ‘1001 Invention’ Global Initiative, and the impact it had in terms of attracting attention of the public to the contributions of the Islamic civilisation to modern day science and society.
To read the interview, click here.

Emilie Savage-Smith expands in her interview on Islamic medicine of which she draws a lively picture. Beginning with a general survey of the conditions of its inception and development in an intercultural context, she mentions representative names and treatises, then the various fields of expertise are scrutinized and the different innovations this tradition brought are highlighted, from the classification of diseases, their treatment, the use of surgery, the improvement of medical instruments and the foundation of hospitals. The answers of the expert are informative on specific areas of medical care such as ophthalmology, mental illness, the development of a real industry of drugs, the various ways of healing, including the use of music in the treatment of emotional and mental stress. The exploitation of this treasure of medical knowledge in Europe until the 17th century is also reminded.
To read the interview, click here.

George Saliba depicts a general view of Islamic science, with a special focus on his field of expertise as a world specialist of Islamic astronomy. After drawing a general overview on the tradition of Arabic astronomy and how it developed after a period of appropriation of Greek learning, he shows how the planetary theories of Muslim astronomers of the 13th and 14th centuries were transmitted to Europe and how Copernicus got influenced by them, sometimes repeating them without even full understanding. At the end, George Saliba makes a vibrant call to the young generation to continue research in this rich and promising field to uncover he jewels of Muslim scientific heritage which are still hidden in unedited manuscripts.
To read the interview, click here.

The interview with Zohor Idrisi sheds light on Islamic agriculture and the culinary art in Muslim heritage. She mentions the various factors that favorised the development of agriculture in the Islamic civilisation, such the use of astronomical knowledge, the availability of an efficient water management system, the introduction of new techniques in irrigation, the use of new varieties of crops and plants. The result was a real agricultural revolution marked by a high productivity, never reached before in history. The last part of the interview hits upon contemporary issues, like environment strategies and consumption habits that we have to learn from the standpoint of Islamic practices based on respect of nature, human wisdom and common sense.
To read the interview, click here.

The tradition of Islamic astronomy is the main topic of the interview conducted with Rim Turkmani, an astrophysicist scholar, who draws on her passion for Islamic science to present a survey on salient aspects of Islamic classical astronomy. At the end, she shows how this scientific tradition is still inspiring today. On that point, the attitude of openness, diversity and tolerance that marked the scientific tradition of Islam is highlighted.
To read the interview, click here.

Islam in China and the contribution of the Muslim community of China to Muslim heritage is the theme of the interview with Anthony Garnaut. The genesis of the Chinese Muslim community, its history and culture are dealt with brilliantly, as well as the interactions between the Islamic civilisation and China in science and technology, especially in what regards four great inventions, that is paper making, compass, gunpowder, and the moveable type of printing. To broaden the scope of the analysis, the interview touches upon subjects such as Ibn Battuta’s travel to China, the particularities of spiritual life of the Muslim community in China, and the situation of Islam in China today.
To read the interview, click here.

Interviewing Peter Sanders, the well known British photographer, means forcefully talking about his artistic work and his experience as a Muslim, a Briton led to Islam through a long spiritual journey. These two dominant themes intermingle in the artist’s work in which he presents views and aspects of contemporary Islam in photography. A special mention is made of the great exhibition Peter Sanders mounted, the ‘Art of Integration’ in which he endeavoured to show representative aspects of British Islam.
To read the interview, click here.

The interview with Abdul Sahib Shakiry went along on his interests and activities as a promoter of Islamic tourism, with its correlate concept, responsible tourism. It is in this perspective that he advocated for the role of such encounters to develop mutual knowledge and understanding between various communities and cultures. Hence, tourism towards the Islamic world and from the Islamic countries to Europe is to be encouraged and intensified in order to bring people together and share their common values instead of stressing their differences.
To read the interview, click here.

The interviewing with Seyyed Hossein Nasr, the eminent specialist of the Islamic spiritual tradition, focused on the core of spirituality in Islam, the contributions of Muslim scholars and thinkers in developing an original spiritual dimension, the formation and spread of schools and currents in Muslim sufism, and the role of Islamic spirituality in today’s world. In a learned, informed and easy discussion, Seyyed Hossein Nasr covers the issue brilliantly and shows what meaning can Sufism and spirituality bring to our modern world, to cure some of its ailments.
To read the interview, click here.

In this last interview that closes this series of Muslim Heritage Interviews, Rabie El Said Abdel-Halim, well known practicing physician and eminent expert in urology, poet and historian of Islamic medicine, details his passions for Islamic medicine and its history. Beginning from the start of his career as doctor and historian, he shows how he was inspired by the sentence of George Sarton that if we do not understand the history of scientific knowledge we will not be able to add to it. Rabie Abdel-Halim describes in detail the contributions of the physicians and medical authors of the Islamic civilisation to various fields of medicine, in urology, anaesthesia, surgery, anatomy, and others. For him, one of the most inspiring lessons we learn from the history of medicine and the history of science is that these disciplines broaden our world viewpoint and outlook to life. A thoughtful study of the history of science is bound to strengthen a unique feeling of brotherhood, unity and universality of mankind.
To read the interview, click here.